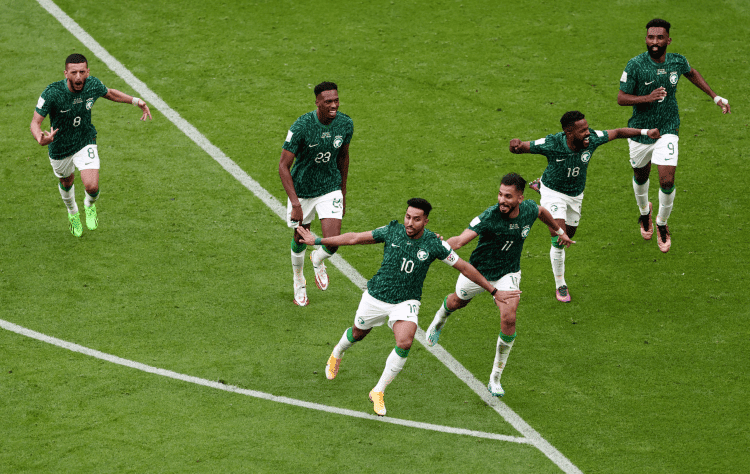 Mr Jollof, a Nigerian celebrity comedian on Tuesday placed a 100,000 naira bet on Saudi Arabia to beat Lionel Messi’s Argentina 2-1 and it happened!

Mr Jollof who placed a bet on Argentina to lose to Saudi Arabia and even predicted a correct score line of 2:1 in favour of the Saudis, posted on his social media when it entered.

In a surprising exhibition, Saudi Arabia upset Argentina 2-1 in the ongoing 2022 World Cup in Qatar, outlasting the tournament favorites.

Argentina had a strong first half, but after two goals were cancelled out just before halftime, they were unable to win all three points. In the first ten minutes of the game, seven-time Ballon d’Or winner Lionel Messi converted a penalty to give his team the game’s lone goal.

After a VAR intervention for offsides in the setup, Messi and Lautaro Martinez’s goals were both reversed.

Immediately after the second half started, the Saudi Arabian team took control of the match with goals from Saleh Alshehri (48′), who tied the game against Argentina, and Saleh Aldawsari (53′), who scored the game-winning goal.

The goalkeeper for Saudi Arabia put on a masterful display, stopping all potential goals from the opposition till the final siren.

Who is Mr Jollof?

Freedom Mr. Jollof, also known as Okpetoritse Atsepoyi, was born on August 13, 1987, and is currently one of Nigeria’s most popular comedians and media activists.

He is the singer behind songs like “Them go hear word,” “Everywhere Stew,” and “Doings,” which has become a catchphrase known all over the world.

Since his primary professional goal is to make people happy, he adopted the name Mr. Jollof because it is well-known that everyone loves Jollof rice.

He is a smart businessman who has since 2013 focused on selling Samsung Electronics items in Warri, Delta State. In 2014, he received a certificate of honor.

He used social media in November 2016 to turn his talent into a business (Instagram). He currently serves as an ambassador for Instant Pickup and Billionairebet, two of Nigeria’s top betting companies.

His distinct sense of humor helped him get popularity in the Nigerian entertainment industry quite quickly. In an effort to reach a global audience and share his message of pleasure, DOINGS TV was established in August 2017.

What Did Mr Jollof Bet On and What Did He Win?

The celebrity comedian who is based in Abuja, Nigeria placed several best on Saudi Arabia before the Argentina match and he won them all.

The first he played was a in-play which is also referred to a live match, where he put Saudi Arabia to win @110.00 odds and played it with 2000 Nigerian Naira.

Despite the fact that it is known as the World Cup, only countries that permit sports betting are permitted to wager on it.

However, you do not need to live there in order to place a wager. If sports betting is permitted in the countries that border yours, you may always travel there to do so if your country does not permit it.

Brazil is presently the favorite to win the World Cup, with odds of +450 according to DraftKings. The odds for France to win are +550, and the odds for England are +600.

Since the advent of internet sports betting, live betting has grown in popularity and is a terrific component of soccer betting. Before choosing how to bet on the World Cup, doing so will enable you to evaluate the game you’re watching and whether a certain side dominates the match.

Every sportsbook offers World Cup live betting, and many of the markets are the same as those available prior to kickoff but with slightly different odds.