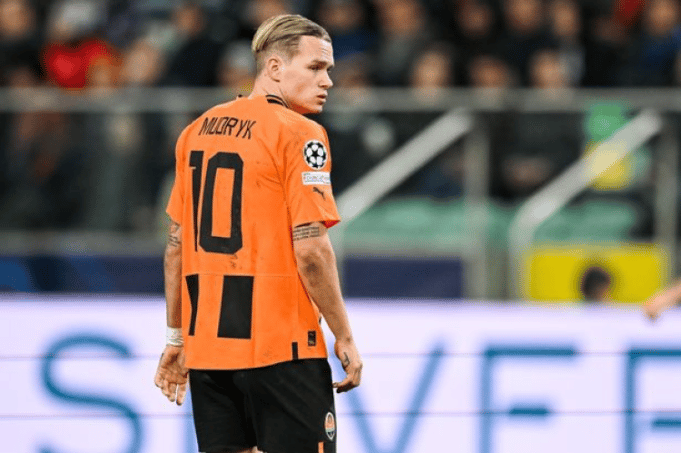 Mykhailo Mudryk has been confirmed as Chelsea player for a transfer deal worth £88.5m amid heavy links With Arsenal.

Mudryk has already traveled to the UK in preparation for his Sunday medical in London. He will see Chelsea face Crystal Palace at Stamford Bridge.

Even as recently as Friday, Arsenal was still in negotiations but was ready to back out of the deal if the Premier League side fails to meet their expectations.

Behdad Eghbali, a co-owner of Chelsea, and Paul Winstanley, the club’s director of international transfers, arrived in Antalya, Turkey, on Saturday to finalize the purchase before flying Mudryk back to the UK on their private aircraft.

Mudryk is anticipated to be at Stamford Bridge to watch Chelsea play Crystal Palace after having his medical on Sunday in London.

Chelsea has tendered a seven-and-a-half-year deal to the 22-year-old in hopes of securing the transfer.

Chelsea will pay €70 (£62) million up front and €30 (£26.5) million in add-ons, which include meeting certain performance-related requirements like the Champions League and Premier League titles.

Shakhtar announced on Saturday night that a deal was “very close.”

Following that, Chelsea released a statement saying they were “discussing terms” over a signing fee with Shakhtar.

“Should a deal be agreed between the two clubs then the Ukrainian international, who can operate as a winger or a forward, will discuss personal terms with the Blues ahead of a permanent transfer,” The Blues added.

Mudryk had previously stated on social media that he preferred to sign with Premier League champions Arsenal, and it was assumed that personal terms would not have been an issue.

He shared pictures of himself watching Arsenal games and gushed over Mikel Arteta as a “great coach” in a fake Instagram post that showed him being imprisoned by Shakhtar Donetsk while they held out for higher bids.

He now seems destined to join Graham Potter’s poor Chelsea team, which has won just once in its previous nine games.

Mykhailo Petrovych Mudryk, a professional football player for both the Ukraine national team and Ukrainian Premier League club Shakhtar Donetsk, was born on January 5, 2001. He plays as a winger.

Being an Orthodox Christian, Mudryk usually brings spiritual objects to sporting events. He has been candid in several interviews about how important faith is to him. He wishes to discuss God with everyone, yet he frequently restrains himself out of respect for others’ religious beliefs.

According to him, “Only Jesus” is the greatest and most significant of all of his tattoos.

How Will Mudryk Fit Into The Chelsea Team?

He had a transfer value of less than £1 million at the beginning of the previous season and was unknown outside of Ukraine. He is currently one of Europe’s most sought-after young players. After a meteoric climb, Mudryk seemed to be headed for great things.

After Kylian Mbappe and Vinicius Junior, the 21-year-old has been dubbed “the finest player in Europe in his position” by Shakhtar Donetsk’s director of football, Darijo Srna.

That assertion may have a hint of hyperbole, but Srna is not the only person who thinks well of Mudryk. His list of potential suitors is extensive, and Chelsea has already met the transfer fee.