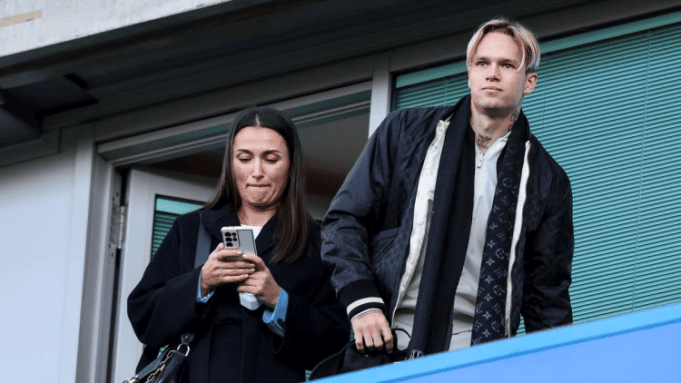 Mykhailo Mudryk was introduced to the Chelsea supporters at Stamford Bridge when his deal was formally announced.

When the Blues faced Crystal Palace, the Ukrainian star was introduced as a member of the team after they beat rival Arsenal to his signature.

At halftime, Mudryk was then escorted in front of the crowd.

He joined the club from Shakhtar Donetsk for £88 million and signed an eight-and-a-half-year contract.

Due to the contract’s length and spread-out payment of approximately £12 million annually, the Blues will be able to avoid any Financial Fair Play [FFP] difficulties.

Due to his performance for the Ukrainian team, the 22-year-old is regarded as one of Europe’s most promising young talents.

In 18 games thus far this season, the left-sided player has scored ten goals and contributed eight assists, including two in the Champions League.

In recent weeks, the Gunners had appeared to be strong favorites to sign the attacker after Mudryk posted a number of social media tweets expressing his desire to play for Mikel Arteta.

However, Chelsea dropped a little indication on their social media pages that a transfer was imminent when they added his name to their Instagram bio.

On Sunday morning, in preparation for the match against Crystal Palace, he had his checkup at Chelsea.

On Twitter, Shakhtar Donetsk shared a photo of Mudryk and Darijo Srna, the club’s director of football, visiting Stamford Bridge.

Soon after the game, Chelsea announced that he had joined the Premier League side.

‘I’m so happy to sign for Chelsea,’ the Ukrainian said after completing the move.

‘This is a huge club, in a fantastic league and it is a very attractive project for me at this stage of my career. I’m excited to meet my new team-mates and I’m looking forward to working and learning under Graham Potter and his staff.’

Related
Marcus Rashford Viral Goal Celebration, Meaning and Why Others Are Doing it

Mykhailo Petrovych Mudryk, a professional football player from Ukraine, was born on January 5, 2001. He plays as a winger for Chelsea of the Premier League and the Ukrainian national team.

Before transferring to Shakhtar Donetsk in 2016, Mudryk began his career in the Metalist Kharkiv and Dnipro Dnipropetrovsk academies.

Two years later, he made his professional debut after receiving loans from Arsenal Kyiv and Desna Chernihiv. He transferred to Chelsea of England in 2023 for an initial payment of £62 million.

Mudryk, who has previously represented Ukraine at several youth levels, made his full international debut for the nation in 2022.

In the Kharkiv Oblast town of Krasnohrad, Mudryk was born and nurtured. Orthodox Christian, he routinely brings religious mementos to sporting events and has been outspoken about the significance of his faith.

Mudryk has a number of tattoos, but he values the one that says “Only Jesus” the most.

Mykhailo Mudryk, a winger from Ukraine, joined Chelsea from Shakhtar Donetsk on Sunday in a move worth 100 million euros ($108 million), with a record 8 1/2-year contract. He is the latest high-profile player to join the club under new American ownership.

Shakhtar announced in a statement that it will receive 70 million euros ($75 million) from Chelsea as well as an additional 30 million euros “as a bonus payment.” Chelsea did not disclose the price.

The Ukraine winger has a deal that extends through 2031, but the Blues outbid Arsenal to sign him.

Chelsea reportedly convinced Shakhtar for the player by agreeing to a deal worth a total of 100 million euros ($108 million).

How Good Is Mudryk?

With his stronger foot, Mudryk is a right-footed winger who like to cut in from the left.

He can accelerate swiftly from a standing start to attain his top speed, which is a special strength.

By doing this, he can raise his opponent such that he can then knock the ball either way and run away from them.

Before hitting a cross into the box, he frequently does this down the touchline and onto his weaker foot, which is the way his opponent won’t expect him to go.

He can put good balls into hazardous places with his left foot, even though doing so requires utilizing his weaker foot.