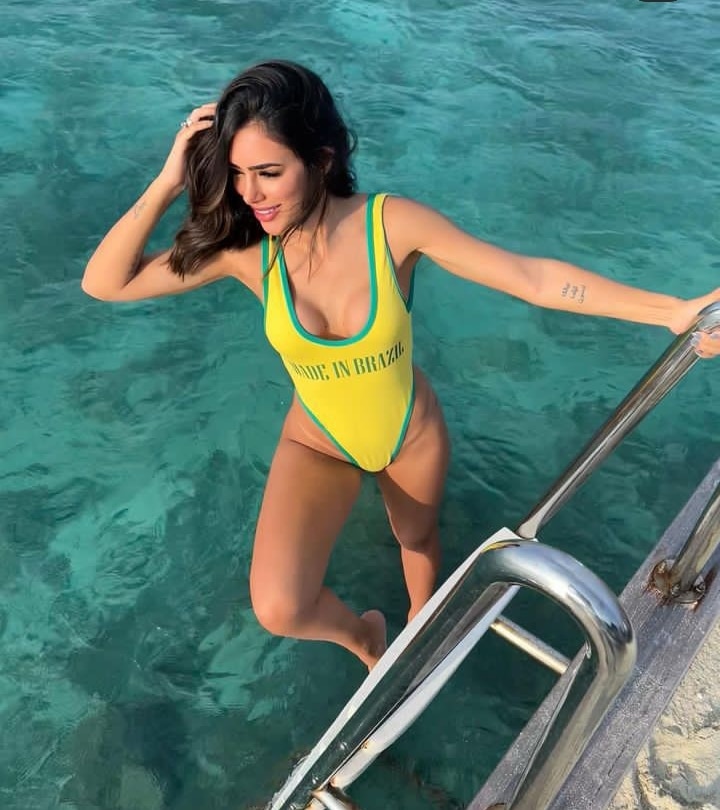 Bruna Biancardi, a massive lover of swimming flaunts her gorgeous shape in a sexy bikini branded in Brazilian colors as she posed for a shot in a pool.

The 27-year-old stunning Brazilian model and influencer customized “made in Brazil” on the sexy yellow swimwear ahead of Brazil’s opener against Serbia today, November 24. The World Cup match will kick off at 20:00.

The 30-year-old Brazil superstar, Neymar Jr. will be playing his side’s World Cup opener against Serbia without the direct support of his ex-girlfriend, Biancardi. She would however support the entire team for her love for Brazil, her country of birth.

Bruna Biancardi is a famous Brazilian social media influencer and model, who has 1.8 million followers on Instagram.

Aside from her modeling career, the 27-year-old Sao Paulo native also owns her clothing brand.

The pair are believed to have started dating in 2021 but kept their relationship a secret for months.

However, the couple’s relationship eventually became official in January 2022, after announcing to their fans on Instagram that they were engaged.

Later on, rumors regarding their split started to sprout after the PSG legendary forward stopped wearing his engagement ring in public.

After taking a break from social media, the Brazilian sexy model Biancardi confirmed her split from Neymar, addressing myriad rumors that the former Barcelona star had cheated.

According to reports, the legendary Brazilian forward allegedly cheated on the super-hot model Biancardi during a party in Rio de Janeiro.

Biancardi, however, renounced the allegation in August 2022 and restated her continued affection for the PSG star and his family.

Her Instagram post read: “Don’t believe everything that happens out there. I am very fond of him [Neymar] and his whole family. Please stop involving my name. Thank you.”

However, despite the controversy surrounding her relationship with the Brazilian legendary striker, the supermodel routinely shares lone pictures of herself.

From all indications, Bruna Biancardi and Neymar are no longer officially dating but a reunion is still very much possible.

While Neymar’s ex-girlfriend, Bruna Biancardi, is busy flaunting her gorgeous curves on the internet, Neymar’s only focus and aspiration are to help Brazil win the 2022 Qatar World Cup.

Neymar said he would give his life for Brazil to win the Qatar World Cup.

The Brazilians boasted a startling winning record before losing last year’s Copa America final to Argentina as they won 12 out of 13 matches.

However, the former Barcelona star, Neymar said such defeat will not repeat itself this year and claims Brazil is going home with the trophy.

Neymar, in a live discussion with Flamengo player Diego Ribas, said: “I wanted to win the Champions League for PSG this time, but unfortunately, we couldn’t.”

“I’m preparing myself both physically and mentally so that everyone goes well, and we have a ‘Brazilian World Cup’ this time.

“I’ll give my life for it, I have played it two times now and I know how it works.

“If you are not ready, the opportunity will go away, so I can’t let it escape me.”

Brazil will hopefully claim their first three points in their opener against Serbia at 7pm today before playing other Group G rivals Switzerland and Cameroon.