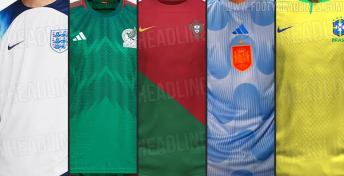 After some leakages were recorded for some national teams such as Brazil, England, Germany, and others, Nike has officially released 12 of the thirteen 2022 World Cup Kits for some National teams. Football fans all over the globe have been eagerly awaiting this release as the World Cup kicks off on Sunday, November 20, 2022, in Qatar.

Nike has once again reasserted its dominance as the top and Premier designer of World Cup kits for the 13 national teams that have made it to the World Cup.

The premier sportswear brand has finally fed the taste and hunger of football fans who were eagerly awaiting the release of the World Cup kits of their respective countries, with the tournament kicking off in less than two months in Qatar. The home and away kits of 12 out of the 13 national team’s Nike handles had been released.

Countries whose World Cup kits have been released by Nike include Brazil, France, England, Netherlands, Portugal, Australia, Canada, Croatia, South Korea, Poland, Saudi Arabia, the United States, and host nation Qatar. As a major manufacturer of World Cup Kits, Nike deploys unique motifs and features as it leans on classy and rich heritage and tradition to make the new kits worth the wait. The appearance, features, and design make it all fantastic.

With regards to construction, all the kit is produced with Nike’s technological touch, making it appealing with its colorful design, touch, and expertise. A key feature of all Nike’s World Cup kits is the stamp of Nike’s signature Dri-Fit ADV technology. The Dri-Fit ADV technology makes it difficult for the shirt to gather sweat and get wet easily. It is designed to make the player stay comfortable and dry.

Another characteristic feature is its smooth and soft feel which allows extra comfort for the players to move, run, or mark easily without having to fight off scratches and discomfort. This is made possible by its minimal seams for a smooth, gentle, and soft feel that makes it possible for players to move quickly on the pitch.

There is also a supplementary training gear that uses rigorous data from a 4D model to unleash a cutting-edge, lightweight finish. This implies that there will be accurate reinforcement and venting for playing against any hindrance. Another spectacular feature is how Nike has successful deploy these cutting-edge features to fight off the typical Doha weather which all the team must battle under. It has been confirmed that no matter the time of the day national teams with Nike Kits don’t have anything to worry about.

The 13 countries with Nike membership can cope with the home and away jerseys for the majority of the sponsored federations on September 15. A general release of the full collection is scheduled for Sept. 21.

Check the designs below