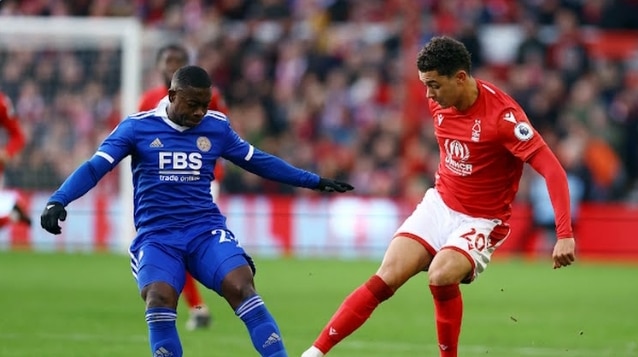 Nottingham Forest have extended their Premier League winning streak to three matches after a deserved 2-0 win over Leicester City.

It was Nottingham Forest’s first home league match against Leicester since February 2014, and were looking to continue on the brilliant record against the Foxes, having lost only one of their seventeen games.

On the other hand, a win for Leicester City would have seen them complete a first league double over Nottingham Forest after 50 years.

Steve Cooper received a major boost ahead of the clash against Leicester City having secured their spot in the EFL Cup semi-finals with a midweek win over Wolves.

After eliminating Wolverhampton Wanderers from Carabao Cup, taking on a struggling Leicester City teetering on the brink of relegation at City Ground was not a big deal for Cooper.

However, the had to guard against the quality in the team. The Foxes were not underdogs despite playing away from home.

The match began in earnest with both sides trying to dominate and control the game. Leicester City, once again brought their quality to bear and controlled proceedings going forward.

Nottingham Forest equally contested for possession and were more threatening when charging down the opponents’ box.

Tactically, both sides failed to create clear cut chances and depended on blunders to create suspense and unleash goal threats.

The first unsurprisingly ended goalless, as both teams retire to the drawing board to see how to get something out of the game.

Few minutes into the second half, Nottingham Forest took the lead, but the goal was disputed a little before a VAR review gave it to the home side.

Leicester City mounted no potent response after trailing by a lone goal. They, however, dominated possession, but failed to make it count.

Nottingham Forest still threatened when in possession of the ball and were looking to double the lead and secure the win.

It was not long before they got another goal late in the game to seal the win. Johnson drove the ball into the bottom-left after Gibbs-White’s driving run.

The game was technically over for Brendan Rodgers and his boys, as they had no way of coming through from the City Ground even with a point.

It was another deserved victory for Steve Cooper in front of their home fans. They have now maintained three straight wins signalling the resurgence of the team after an opening Premier League run.