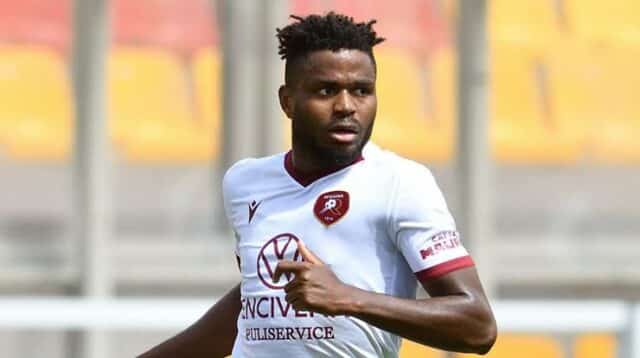 Orji Okwonkwo, a player for the Italian team Bologna, has received a four-year suspension from FIFA in addition to the player’s punishment from the Italian Anti-Doping organization.

To make his suspension official, Jorge Ivan Palacio, the chairperson of the FIFA Disciplinary Committee wrote to the Nigeria Football Federation (NFF) to inform the football body that Orji Okwonkwo has been banned from football worldwide.

“Consequently, the Committee decided to extend the sanction imposed on the player by the Italian NADO on 20 June 2022”, Palacio wrote.

“More specifically, the player is sanctioned with a four (4) years suspension from all football-related activities in accordance with the Decision.”

The last time Okwonkwo participated in a competitive match was in January 2022 while on loan at Serie B team AS Cittadella. The ban FIFA slammed on the former Golden Eaglet of Nigeria will last from 25 February 2022 to 24 February 2026.

Orji Okwonkwo, a Nigerian-born professional football player who plays as a striker for the Italian team Bologna, was born on January 19, 1998.

What did Orji Okwonkwo do?

According to Fifa, striker Orji Okonkwo from Nigeria has been banned from football for four years after being found guilty of a doping offense.

The national anti-doping organization (Nado Italia) first imposed the ban on the 24-year-old player for Serie A team Bologna in June.

Okonkwo, who plans to appeal, tested positive for the steroid clostebol in February while on loan at Cittadella.

The World Anti-Doping Code forbids the use of clostebol, which the player claimed to have taken for treatment of a troublesome knee.

According to Jorge Ivan Palacio, the chairman of Fifa’s disciplinary committee, the Nado Italia fines have now been expanded to have “global effect.”

What team does Okwonkwo play for?

Bologna acquired Orji Okwonkwo in August 2016. Okwonkwo made his Serie A debut with Bologna on November 20, 2016, in a win over Palermo.

Okwonkwo scored his first Serie A goal against Sassuolo on September 24, 2017.Okwonkwo and Brescia agreed to a credit agreement on January 31 that would last through June 30, 2018.

Okwonkwo and the Montreal Impact agreed to a loan agreement on February 12 that would last until December 31, 2018.

He was once again acquired by Montreal Impact on January 24, 2020, for a loan with a buy option after the 2020 campaign.

He expressed excitement about working with manager Thierry Henry. Okwonkwo transferred to Reggina of Serie B on February 1, 2021, for the duration of the campaign.

What did he achieve at International level?

Okwonkwo won the 2015 FIFA U-17 World Cup while playing for Nigeria’s under-17 team.

His number on the team was 9. Orji Okwonkwo has additionally been employed as a poacher and as a pusher.

Who is Orji Okwonkwo dating?

Our records indicate that Orji Okwonkwo may be single and has never been engaged. Orji Okwonkwo is single as of the time of writing this article.