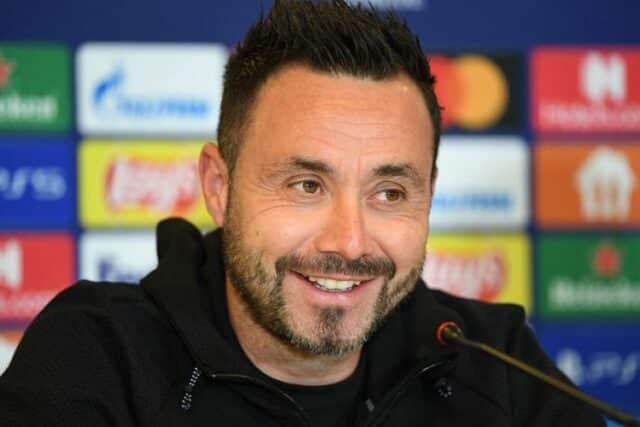 Pep Guardiola is happy that Roberto de Zerbi is the new manager of Premier League side Brighton. Robert de Zerbi was appointed Brighton manager after his predecessor Graham Potter moved up the ranks of his coaching career as Thomas Tuchel’s successor at Chelsea.

Robert de Zerbi has confirmed that Manchester City manager Pep Guardiola is happy with his emergence as the new Brighton manager. The 43-year Italian professional football manager and former player stated this in his first news conference as Brighton Manager.

According to him, he spoke with Pep Guardiola after taking up his role as new Brighton manager, and the Spaniard was happy to welcome him to the Premier League.

“I spoke to Pep on Sunday evening, yes. He’s very happy that I’m on board here”, Robert de Zerbi revealed.

Robert de Zerbi also revealed that Pep Guardiola was ready to help him succeed at the club, but not in matches against Manchester City.

“He told me very good things about the club, and if I need he will be very happy to help me – but of course, not in the match we are playing against them”, he said.

De Zerbi has been a great admirer and student of Pep Guardiola’s football style and tactics. He had reportedly fly to Manchester to meet with Guardiola, who he described as “the architect of the strongest team of the last 40 years”.

De Zerbi is said to be curious of Guardiola’s successes with big teams in Europe and does rate the Manchester City coach high above all other managers.

Although he has not worked professionally with Guardiola, he has observed and imitated the Manchester City manager for years.

De Zerbi had reportedly met with Guardiola at Bayern Munich when he began his coaching career in the fourth tier of Italian football. The former Barcelona manager was impressed with his success during a brief spell with Sassuolo, making him name-check De Zerbi when talking about promising Italian managers.

During his unveiling as Brighton’s new manager, de Zerbi had described ‘Guardiola’s football as ‘unreachable’ when asked about it. However, he maintained that he will try to imitate it.

De Zerbi’s recent achievement at his former club Shakhtar Donetsk has been tipped by pundits to be close and similar to Guardiola’s style.

Explaining his approach during the unveiling, De Zerbi said, “Don’t throw away the ball, that is something very clear. [I want] to attack, to make the game… to attack in the right way and, when we do not have the ball, to take it back as fast as we can.”

The bond between the two coaches has been reportedly strengthened by the presence of Enzo Maresca, a childhood friend of De Zerbi, on Guardiola’s coaching staff. De Zerbi reportedly spoke with Maresca before accepting Brighton’s job. He had also spoken with Guardiola immediately after Brighton confirmed his appointment on Sunday.

The 43-year-old former Shakhtar Donetsk manager also revealed that many clubs had lined up to secure a deal with him, but he had opted for the Premier League over other opportunities that knocked at his door.

“We met each other straight after we had started to talk. Of course, other teams were interested in me, but I’m delighted to be here”, coach Robert de Zerbi noted.

Zerbi said he liked and cherished Brighton’s style of play which is the same as his idea of football and preferred pattern.

“Brighton strongly wanted me as a coach, and their style of play is very similar to my idea of football.”

Robert de Zerbi left his role as Shakhtar Donetsk’s manager following the war in Ukraine to join the Premier League side. Prior to his departure, he had admitted that everything went well with the Ukrainian giants, but he had to leave due to the war, which interrupted everything.

Related
How Long is a Soccer Game? Everything You Need To Know

“Of course I was not expecting everything to finish in February, and of course it was bad not only due to the war, but having to leave something going very well.”

Meanwhile, he had expressed his sympathy with the Ukrainian people and the players he trained who have been affected by the brutalities of the war.

“What I can do is keep working with the same passion”, he said. “Of course, I have in me these experiences but also feeling for the Ukrainian people and the players I trained.”

De Zerbi reiterated his happiness with his new role and readiness to start studying every single player at the Seagulls. He thanked the chairman and the management of the club for the opportunity.

Graham Potter left Brighton on a good note, with the team sitting on the last Champions League spot in the Premier League table after 7 matches. Roberto de Zerbi faces a huge task ahead of him, stepping into the shoes of Graham Potter.

Nevertheless, the Italian-born tactician has his wealth of experience to rely on. Roberto de Zerbi has managed more clubs than his predecessor Graham Potter. He has managed Palermo in Serie B, Sassuolo, and Benevento in Serie A.

On 25 May 2021, De Zerbi was announced as the new head coach of the Ukrainian Premier League club Shakhtar Donetsk. He won the Ukrainian Super Cup in 2021 against Dynamo Kyiv, becoming the first Italian manager to do so.

After Russia invaded Ukraine, Zerbi left his role as coach of Shakhtar Donetsk but took the club to the summit of the Ukrainian Premier League before the League was called off.

Man City, Haaland, and the Myth of the Transformative Signing