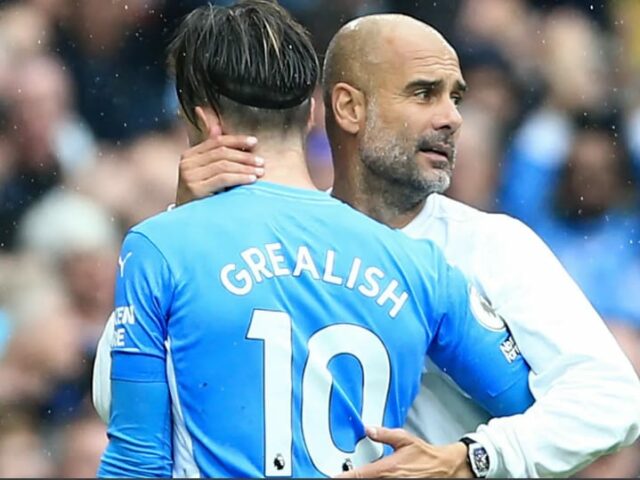 Jack Grealish, who cost Manchester City a record-breaking £100 million, has received support from Pep Guardiola and has been advised not to pay attention to his doubters.

After recovering from an injury at the beginning of the season, Grealish has had a difficult start, going without a goal or an assist in four appearances for City.

He was substituted out with City down 1-0 to Borussia Dortmund in the Champions League midweek, and Guardiola’s team mounted a stunning comeback to win 2-1.

Grealish had a lackluster start to the new season, but Gareth Southgate still picked him for his most recent England team because the winger will almost certainly play in the World Cup this winter.

Despite the 27-year-old’s paltry return of goals and assists, City manager Guardiola reiterated that Grealish is still a crucial player for him moving forward.

Guardiola said, “I know him and I’m more than thrilled and satisfied with what he’s doing. I have absolutely no doubts about him. It will only take a short while for him to regain some of the momenta he had at the start of the season.”

He got off to a good start but had to halt due to an ankle issue; luckily, it did not get worse. He was the only forward in the last game who made bold one-on-one runs in the final third.

Grealish is not one of City’s nine-goal scorers this season, but Guardiola claimed that the club did not sign him from Aston Villa to score goals and provide assists.

Guardiola stated, “We didn’t sign him for the fantastic goals or assists at Aston Villa. It was for another cause, and he did it while he was playing. He competes against other elite players, and he is fully aware of this. Yet never broaches the subject.

“He’s such a great man. In games where he doesn’t play, he’s the first to assist the squad, and in practice, he’s always there.

“His actions and everything else makes me very happy. I want him to score goals and provide assists, and he does both of those things.”

Grealish got his first goal of the season as early as the first minute of the game against Wolves on Saturday to silence his doubters. Note that Grealish’s goal came when his performances for Manchester City and his status in the England team were being questioned by critics.

The forward assisted Pep Guardiola’s team in cruising to a 3-0 victory by serving as the focal point of most of the visitors’ offensive efforts.

As a result, City leads the league going into the international break after scoring 23 goals in seven Premier League games. They also have a striker in Erling Haaland who is in excellent form, hitting 14 goals in nine games overall.

The Englishman stated after scoring his first goal in 125 days: “I enjoyed that. It took me a while to achieve my aim.

“At the tail end of last season, I scored against West Ham. And we defeated a top team with a fantastic outcome. Wolves don’t receive the recognition they merit.”

Grealish also talked about the recent post-match criticism he received, which brought up the topic of his £100 million price tag once more.

Regarding the recent discussion, Grealish openly acknowledged all the criticism that has been directed at him.

The English winger said, “Rightly so [I’ve been criticized]”.

“I ought to be tallying more goals and dishing out more assists. Now all I can do is score goals and assist others. People will always be talking about me because of the price I purchased for.

“However, if you look at my entire career, I haven’t scored many goals. I hope I can do it with this team and in front of these supporters because it’s something I want to add to my game.”