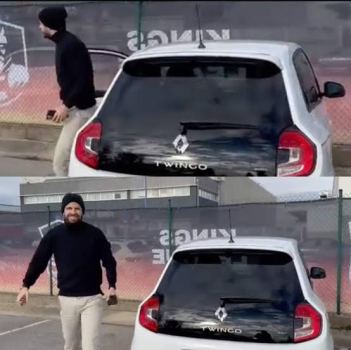 Barcelona legend Gerard Pique continues to hit back at his ex-wife Shakira after the Colombian minstrel recently released another single haranguing Pique’s relationship with Clara Chia.

The pair halted their 11-year-long relationship in 2022 after Shakira accused Pique of cheating on her and they released a joint statement announcing the split.

However, since the duo went apart, Shakira appears to have mixed her music career with the heartache agonizing her following the split as she has been trolling resentment at Pique.

Shakira’s music has embodied references to her ex-husband Pique, but never more so than in her latest release with Bizarrap.

The Colombian she-wolf, Shakira featured Bizarrap to release “Shakira: Bzrp Music Sessions, Vol. 53” in reaction to her split from her ex-husband Pique after he cheated on her.

In her most recent song, ‘Out of your league‘, parts of the lyrics from Shakira read:
“I’m worth two 22’s. You traded a Ferrari for a Twingo. You traded a Rolex for a Casio… A lot of gyms, but work your brain a little bit too.”

Gerard Pique has now responded to the resentment Shakira threw at him in her viral and controversial collaboration with Bizarrap, Music Sessions Vol.53, using his Kings League show to do so.

Piqué had previously given a sarcastic reply to Shakira’s grievances when he appeared on the Twitch platform to continue promoting his Kings League.

Kings League is an exhibition football tournament launched by Pique. It’s a 7-a-side soccer competition he organized with the ‘streamer’ Ibai Llanos.

While talking about the contest, the 35-year-old Spaniard organized, Pique did not miss the opportunity to hit back at his ex and the mother of his two children.

In a moment, he stared at his wrist and saw that he was wearing a Casio watch and announced that every president in the Kings League will get a Casio.

And on last Friday’s ‘Chup Chup’, a talk show in which the Kings league’s presidents participate, the Spaniard, as promised, handed out Casio watches to announce the sponsorship agreement he had reached with the Japanese brand.

Gerard Pique has responded to the Colombian superstar yet again as he was spotted riding a Twingo.

The former Barcelona legend announced that on Sunday, he would drive to the port of Barcelona in a Twingo, after reaching a personal sponsorship deal with Renault.

Many thought this was a joke but the Kings League CEO doesn’t take Shakira’s harangue lightly.

Come Sunday, January 15, the third matchday of the league, Pique kept to his word as he was spotted behind the wheels of a Renault Twingo.