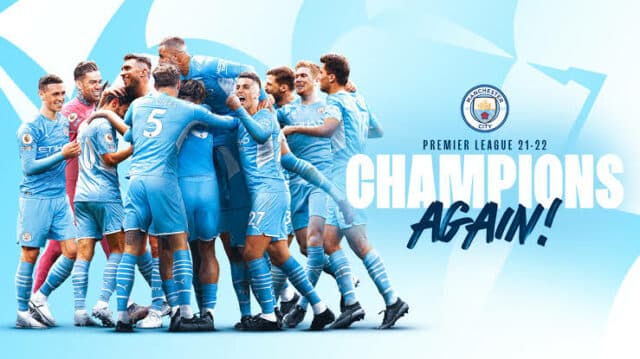 A dramatic last-day drama in the Premier League saw Pep Guardiola’s men win their fourth title in five seasons after coming from two goals down in the first half to beat Aston Villa and pip Liverpool to the title.

According to the Premier League, the Citizens earned the highest amount of money after emerging top of the Premier League. Second place team, Liverpool, is second on the list of top earners. However, down the table, some dramatic fluctuations are recorded.

Norwich made history after earning a whooping £100m on the bottom of the table. Spurs and Newcastle earn more money than the teams above them in the table.

£34m, including additional £7m international payments, were made to Manchester City after they finished in the pole position in the Premier League table. The payments are usually calculated based on the UK merit system, largely dependent on the team’s position on the table.

Nevertheless, their facility fees which were paid out each time a Premier League club appeared in a live televised match, were about £1m less than Liverpool’s. This happened through their UK merit payment which was nearly £2m more than the Reds.

Norwich, who won only five matches, lost 26, conceding 84 goals last season, became the first club in the history of the Premier League to earn a whooping £100m in prize money despite finishing bottom of the table.

Norwich earned similar facility fees as Watford and Burnley, who joined them in relegation to the Championships. However, Norwich’s domestic and international merit payments were not high due to their final position.

Instances were also observed where some teams earned more money than those who finished above them on the table, due to facility fees.

A typical example was 11th-placed Newcastle, who raked in more than £126.7m in prize money, an amount that was more than 10th-placed Wolverhampton Wanderers, who finished in the 10th position on the table with £124.5m and Brighton finished 9th place and earned £127.7m which is less than what the Magpies pocketed.

Newcastle’s money was paid after they featured in 21 live games, while Brighton and Wolves were televised 15 and 16 times, respectively.

Tottenham, who were fourth on the table, earned more than £146m after they featured more than Chelsea in three more live games. The Blues earned £145.6m despite finishing third place on the table.

Everton and Leeds meanwhile figured in 10 more live games than Southampton, and earned £117.2m and £115.1m – compared to the Saints’ £110.9m – despite finishing in the two places below Ralph Hassenhuttl’s men.

However, more live coverage of matches did not always mean a higher figure in prize money for teams. Arsenal earned less than their north London rivals Spurs despite being televised on two times more than the Antonio Conte-led team.

All the 20 clubs in the top flight last season had an equal UK share of £31.8m and an international share of £48.9m. £6.8m was also set for the central commercial.