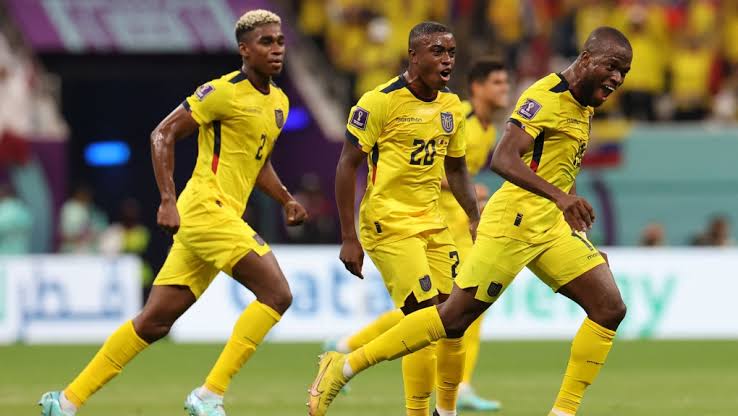 Qatar becomes the first host country to lose the opening match of the FIFA World Cup since 1992 after Ecuador beat them 3-0.

Before the game began, Gianni Infantino spoke to the stadium’s spectators over the microphone.

He stated: “Dear friends, welcome to the FIFA World Cup Qatar 2022. Welcome to celebrate football, because football unites the world. Let’s welcome the teams and let the show begin.”

The national anthems began practically immediately after the players entered the field.

The first song played was Ecuador’s national anthem, and wow, the crowd was really supporting the team.

Following the conclusion of Qatar’s national anthem, the players shook hands before the game began.

Although a host nation has never lost the first game of the FIFA World Cup, most pundit had anticipated that Qatar would lose to Ecuador which they did.

Prior to the toss, the participants exchanged necklaces and gave each other hugs.

As the FIFA World Cup 2022 got underway earlier today, it was Qatar who kicked off the game as expected.

In the opening match of the FIFA World Cup, Ecuador defeated Qatar 2-0 thanks to two goals by Enner Valencia.

The South Americans utterly outperformed Qatar in the first half, and that was the story of the match.

The first goal came from a penalty, while the second one was a spectacular header.

Despite months of preparation, Qatar, which hoped to avoid becoming the first World Cup hosts to lose their opening match, appeared unprepared.

In the history of the Men’s FIFA World Cup, the host nation has never dropped their opening match.

However, Qatar was unable to prolong that run. Although Qatar wants to emphasize how special this World Cup is, this record may not be the best method to do so.

They can take some comfort in the knowledge that the home team hasn’t always participated in the Men’s World Cup’s official opening match.

After awarding the honor to the reigning champions from 1974 to 2002, FIFA reinstated the custom of the host nation playing in the opening match in 2006.

Ecuador whom defeated Qatar in the opening match of the World Cup on Sunday, saw two goals from Enner Valencia and Gustavo Alfaro’s team earning a well-earned victory.

With the victory, the South Americans now have a three-point advantage in Group A, leaving the hosts in serious trouble with games against Senegal and the Netherlands still to come.

Qatar, on the other hand, gave little to nothing in this inaugural World Cup game.

The current Asian champions scarcely seemed like a danger to generate a chance, much less score, which put them in an awkward position going forward.

The hosts got off to a terrible start, and they should be grateful that the score was just 2-0.

Ecuador now has a good opportunity to advance from Group A, whereas Qatar appears to have no chance at all.