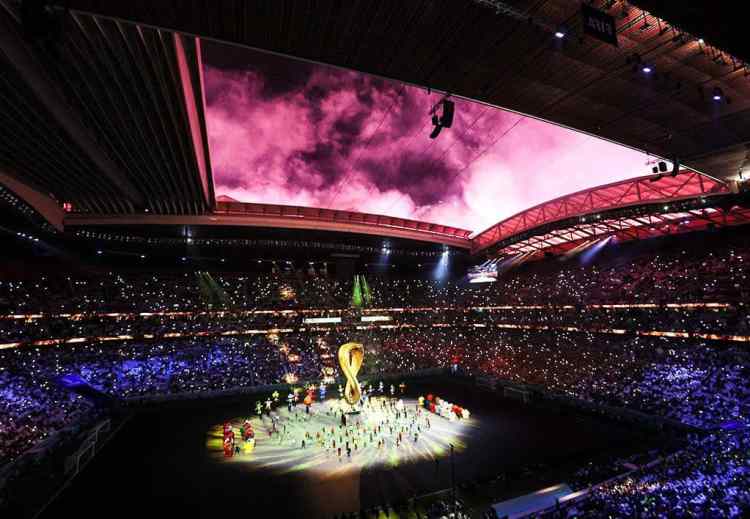 Qatar seemed to convinced the world of their readiness to host the 2022 World Cup with a grand opening ceremony.

While Dua Lipa, Rod Stewad, and Gerard Pique’s ex-lover Shakira rejected offers to perform at the occasion, other top global artists were eager to take to the stage. Artist who were called up for the event include; J Balvin, Robbie Williams, Jason Derulo, Clean Bandit, Sean Paul, Nora Fatehi, Black Eyed Peas, Jungkook of BTS, Nicki Minaj, Maluma, and Myriam Fares. BTS star Jung Kook had earlier arrived at the occasion to the fanfare of his global fans.

The opening ceremony was highly anticipated given the recent developments in the Gulf state in the build up to the tournament.

Qatar, once again, had an opportunity to prove critics wrong with a glamorous and fun-filled opening ceremony at the Al Bayt Stadium.

Before the ceremony, thousands of fans have already thronged into the Al Bayt Stadium, awaiting the performance.

The event began at exactly 3:45 pm. Spectators were first greeted with beautiful scenery involving camels and people dancing around the stadium.

A key figure and member of the ruling Qatar Royal Family, Sheikh Hamad bin Khalifa Al Thani was shown on a big screen, attracting cheers and uproar of cheers from the fans in the stadium.

Renowned American actor Morgan Freeman was a guest speaker at the event and took his time to emphasize the role of the World Cup in uniting people.

After Morgan Freeman, some topless fellas banging drums, and Ardah dancers squared into the pitch for their performance.

A dance with all the FIFA World Cup flags was performed, and it was such beautiful scenery in the stadium featuring all the flags of all the 32 nations at the tournament.

Then was the giant Qatar 2022 World Cup Mascot, called the La’eeb. The Mascot carries Qatar’s message to the World, “Now is all. Believe in yourselves.”

FIFA president Gianni Infantino, top FIFA executives, and top officials of the Qatari government were also present on the occasion.

Jung Kook of the South Korean band BTS was joined by Qatari singer Fahad Al-Kubaisi as he performed his hit song “This is Dreamers.”

Junk Kook took over the stages of the Al Bayt Stadium and showed such a great and top talent he was as he swept the fans with his great lyrics.

Fahad Al-Kubaisi also put up a great performance, but Kook was the cynosure of all eyes with his majestic and excellent performance on the stage

In all, Qatar put up a great, lively, and entertaining performance at the Al Bayt Stadium.

The opening ceremony finally dovetailed into the opening match, with Qatar taking on Ecuador in a much anticipated World Cup opener.