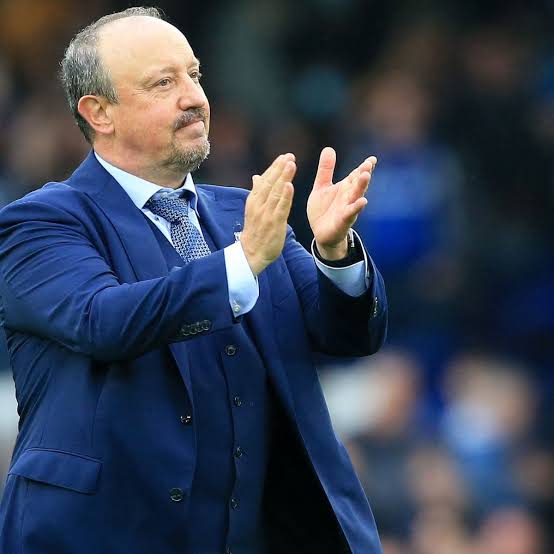 Rafael Benitez, who was dismissed from his managerial duty at Everton early this year said it was impossible to manage Everton the way he wanted due to his relationship with Liverpool.

Rafael Benitez revealed he didn’t regret taking over the coaching job at Goodison Park, however, Benitez admits he struggled to make some specific decisions in the club, unlike the comfy ways he had at Anfield, which led to his abrupt exit from Everton.

Raphael Benitez left Valencia to join the Merseyside on the 16th of June, 2004.

The 62-year-old Spaniard guided Liverpool to victory in the 2005 UEFA Champions League and was named UEFA Manager of the Year.

Benitez also won FA Cup and UEFA Super Cup during his time as Liverpool’s manager before he proceeded to saddle the Serie A club Inter Milan on June 10, 2010.

The 62-year-old Spanish legendary coach replaced Carlo Ancelotti at Everton on the 30th of June, 2021, signing a three-year contract with the club.

Meanwhile, before signing the contract, Benitez was subjected to threats from a group of Everton supporters who disagreed with his appointment and left a banner near his home, reading “We know where you live. Don’t sign.”

However, Everton proceeded to sign the renowned Liverpool coach believing his coaching prowess and ability to build a strong competitive team to win trophies is what they needed.

Nevertheless, the Spaniard’s wonderful desire to imitate his success at Anfield in Everton collapsed after an abrupt dismissal in January 2022 over a run where Everton lost 9 out of 13 games.

Everton succumbed to the call of their fans who demanded that Benitez “get out of our club” during last season Norwich’s defeat.

The Toffees sacked Benitez after last Premier League season’s 2-1 defeat to Norwich City left Everton 16th in the Premier League table, with a total of nine defeats in their past 12 games.

However, the Liverpool legendary coach has opened up on his dismissal, saying his good intentions and ambitions for the club failed because he wasn’t permitted to make certain decisions and saddle the team the way he wanted.

In a recent interview with Sky Sports News, Benitez said he never regretted taking over at Goodison Park but revealed that making certain decisions at the club was difficult due to his bonds with Everton’s Merseyside rivals.

Benitez told Sky Sports he knew from the onset that his duty at Everton would come with some complications due to his history and relationship with his former employer and Everton Premier League’s rival Liverpool.

Benitez said: “At the time Everton came in with the offer, I knew I would give my best and do everything to try to improve things. I knew it could be difficult because I was in Liverpool, so maybe I couldn’t make some decisions. It was very clear to us at the beginning.”

The 62-year-old Spaniard envisaged his sudden exit from Everton even before his dismissal when he revealed he had a meeting with one of the club’s realm when things were not going smoothly and suggested making some changes to help the bizarre status quo.

He said: “I had a meeting with a head of one of the departments and I asked him ‘do you think everything is fine?’ He said ‘yeah, everything is perfect.’ I thought ‘£600m had been spent, it cannot be perfect when the owners aren’t happy and the fans are not happy.’

“So I realized we had to change things inside, but I couldn’t do it straight away because I was a former Red and it could be seen as ‘oh, he’s come in to change our club’.

“In another club, I would have made those decisions. I did it in the past, because you know very clearly that is the way to improve, but there at Everton I couldn’t do it.”

However, Everton shortly appointed former Chelsea manager Frank Lampard on 31 January 2022, to replace Rafael Benítez due to his poor results.

Rafael Benitez became the second person to manage both Liverpool and Everton, since William Edward Barclay in 1890.

With his sacking, the 62-year-old Spaniard became the fifth Everton manager to lose his job in the previous six years.