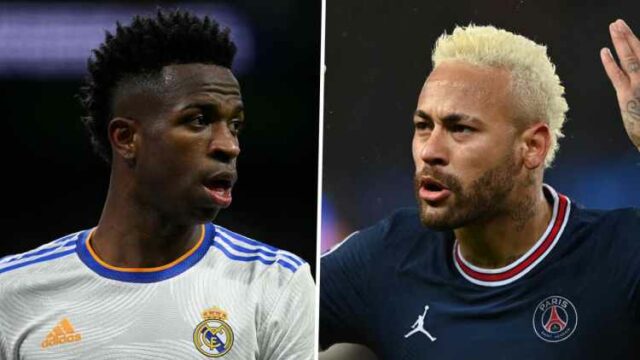 Real Madrid and Brazilian footballers have condemned racist abuses on Brazil and Real Madrid star Vinicius jr. Recall that the President of The Spanish agents’ Association Pedro Bravo had sparked widespread condemnation after he said ‘Vinicius jr should respect his teammates and stop acting like a monkey.’

A torrent of backlash and criticisms has followed Pedro Bravo’s comment which came after he was being asked an opinion on Spanish Television about Vinicius jr’s goal celebrations. Bravo did not mince words, as he went fury with his reply accusing the Brazilian and Real Madrid star of offensive dance steps whenever he scores a goal.

After the offensive comments by Pedro, Vinicius jr has reiterated his resolve to continue with his style of celebrating goals. He accused his critics of being upset by ‘the happiness of a victorious black Brazilian in Europe.’ Vinicius gave the reply in response to Pedro Bravo’s comment.

In a full statement on his Instagram handle, Vinicius jr said;

“They say happiness is annoying. The happiness of a victorious black Brazilian in Europe bothers much more,” Vinicius wrote on Instagram.

“But my desire to win, my smile and the twinkle in my eyes are much bigger than that. You can’t even imagine.

“I was a victim of xenophobia and racism in one statement. But none of that started yesterday. Weeks ago, they started criminalising my dancing.

“They are dances to celebrate the cultural diversity of the world. Accept it, respect it. I’m not going to stop.”

Meanwhile, Bravo’s comments has sparked a backlash against him and a flood of support for Vinicius from Brazilian football greats like Pele and Neymar.

“I always try to be a professional and an exemplary citizen. But that doesn’t click, doesn’t trend on the internet, or motivates cowards to aggressively talk about people they don’t even know,” Vinicius added.

“The script always ends with an apology and a ‘I was misunderstood.’ But I repeat it to you racist: I will not stop dancing.”

After the incident went viral, Real Madrid have released a statement condemning the racist abuse on the 22-year-old who won the Champions League with the club last season.

“Real Madrid condemns all types of racist and xenophobic language and behaviour in football, sport and life in general, such as the regrettable and unfortunate comments made against our player Vinicius Junior in the last few hours,” read a club statement.

“Real Madrid would like to express its affection and support for Vinicius Junior, a player who regards football as an attitude towards life through joy, respect and sportsmanship.

“Football is the most global sport there is and should be a model of values and coexistence. The club has directed its legal services to take legal action against anyone who makes racist remarks towards our players.”

Also condemning the attack is one of football’s living legends Pele. Taking to his Twitter handle, Pele wrote;

“Football is joy. It is dancing. It is truly a party.

“Despite the fact that racism still exists, we will not allow it to stop us from continuing to smile. And we will continue to fight racism in this way, fighting for the right to be happy.”

Another Brazil superstar and PSG legend, Neymar had also condemned the attack as he encouraged the fellow Brazil international to continue dribbling, dancing and be himself. In his words, Neymar wrote,

‘dribble, dance and be you’,

Meanwhile, Bravo has tendered an apology for his comments, saying he used the expression ‘metaphorically’ to say that Vinicius was ‘doing stupid things.’

According to reports, Vinicius has been targeted for racist abuse in his brief sojourn in Spain. In a 2021 El-Clasico clash with Barcelona, Vinicius jr said that he was abused by fans during the match, including in the match against Mallorca in 2022. So far this season, Vinicius has scored five goals, with three assists for Real Madrid.

Racist abuse has been one of the biggest challenges facing football with black players being targeted by hostile fans and some match officials. UEFA, FIFA, CAF, and other football governing agencies have reiterated their opposition to racism and other forms of discrimination and abuses in the game.