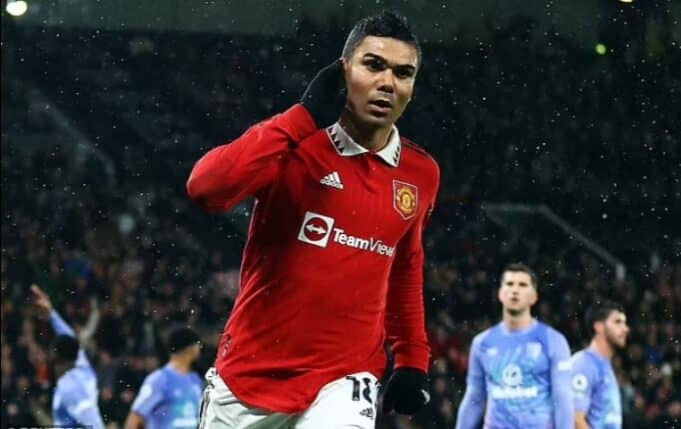 Erik Ten Hag met a Manchester United team in disarray, transfer policy blunders, coupled with a chaotic dressing room filled with unmotivated players piled up the woes of the club.

Despite a promising preseason run by the new manager, United’s deep rot was laid bare in the club’s first two Premier League games against Brighton and Brentford.

It was a disastrous opening match for the Red Devils. Graham Potter, who was Brighton’s manager then, took the Seagulls to Old Trafford and salvaged a historic 2-1 win.

The defeat against Brighton was the tip of the iceberg. The second game against Thomas Frank’s Brentford at the Gtech Community ended in another disastrous defeat for the Red Devils.

Meanwhile, Erik Ten Hag was pursuing key signings to beef up the squad as he embarked on the heinous task of the rebuild.

After he failed out on a possible deal with Barcelona to sign Frenkie De Jong, Erik Ten Hag switched to Casemiro of Real Madrid.

Talks were ongoing between Manchester United and Real Madrid before the heavy defeat against Brentford. Targeting Casemiro was a bold step by Erik Ten Hag after the Brazil international had cemented his place at Real Madrid, and was in the Champions League with the Los Blancos.

On the other hand, Erik Ten Hag only had Europa League football with the Red Devils, and one would have expected Casemiro to immediately reject the offer and continue with the remaining months of his Real Madrid contract.

However, Real Madrid manager Carlo Ancelotti confirmed he has spoken to Casemiro about interest from Manchester United, and the Brazilian has accepted to take up a new challenge.

While Manchester United’s package for Real Madrid and Casemiro expedited the move, The Telegraph reports Casemiro was determined to join Manchester United despite the gap between the Old Trafford club, and Blancos.

He is said to have watched live the 4-0 loss to Brentford and told his agent ”Tell them, I will fix this.”

Sources close to the Brazil international disclose he is very happy now at Man United and has not regretted his move.

Since he join the Red Devils and made his debut for the club against Southampton, Casemiro has scored two goals and delivered two assists in his 14 appearances for the Red Devils.

He is a sensation and has brought threat and stability to Manchester United in the middle of the park.