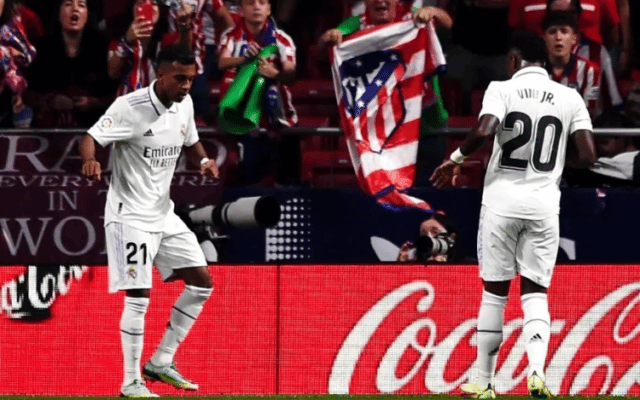 Rodrygo and Vinicius shared a dance as Real Madrid beat Atletico Madrid in a lively derby to make it six wins from six at the start of their La Liga title defense.

When Vinicius Jr.’s shot hit the post and Federico Valverde scored on the rebound, they increased their lead by two goals.

After giving Atletico hope with a goal, Mario Hermoso ultimately ended it with a late red card.

With seven minutes remaining, the substitute, who was making his first start of the season for Atletico, scored with his shoulder after Thibaut Courtois had mishandled a corner from Antoine Griezmann.

The match was overshadowed, nevertheless, by what appeared to be racist chanting directed towards Real’s Brazilian forward Vinicius outside the stadium before the game. This was in response to criticism of his dancing goal celebrations and a discussion about whether that criticism was racist.

After a Real goal, several supporters reportedly tossed objects at Vinicius and sang further songs about him as the game came to a close.

Real Madrid have won each of their last six matches, moving them two points ahead of Barcelona in the standings. Atletico is ranked seventh.

The previous time Real won their first six games was in 1987–88.

What Was Said About The Dance Celebration?

The Real Madrid player Vinicius Jr. decried the criticism that he has characterized as racist for his dancing goal celebrations.

Pedro Bravo, a well-known agent and the president of the Association of Spanish Agents, said on Spanish television on Friday that Vinicius Jr. should quit “playing the monkey” and respect his opponents by refraining from dancing in celebration after scoring.

“When you score against a rival, if you want to dance samba, you go to the sambadrome in Brazil, here what you have to do is to respect your colleagues and stop playing the monkey,” he said.

Bravo has already issued an apology on Twitter, stating that he misinterpreted a metaphor after being widely accused of using racist language on social media.

Vinicius Jr., a Brazilian international, responded to the criticism in a video shared on his social media accounts on September 16 and declared he would keep dancing.

Real Madrid is taking part in the Supercopa de Espaa, Copa del Rey, and UEFA Champions League this season in addition to the domestic league.

They competed in the UEFA Super Cup as the defending European champions against Eintracht Frankfurt, won 2-0 and earning a record-tying fifth championship.

Real Madrid also ought to have been eligible for the yearly FIFA Club World Cup. The FIFA suggestion for a format change has left the tournament’s future in doubt, though.

Real Madrid will take a midseason break to prepare for the 2022 FIFA World Cup in Qatar, therefore they won’t be playing any games between 9 November and 31 December.

The Champions League group stage will end sooner than usual, at the beginning of November, while La Liga will be suspended after matchday 14.