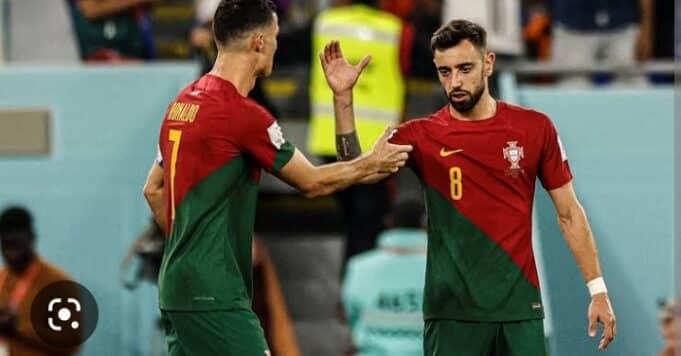 Adidas 500Hz IMU Ball Sensor has finally clarified the true goal scorer between Ronaldo and Bruno Fernandes in the game against Uruguay.

Portugal eased past Uruguay to qualify for the round of 16 of the 2022 World Cup, but the opening goal for the team was a subject of controversy.

After comfortably dominating play and pushing the Uruguayans to their own half, Portugal finally got the better of their opponents in the 54th minute.

Treading down the left, Bruno Fernandes has located Cristiano Ronaldo inside the Uruguayan box. He then sent a cross intended for the former Juventus forward.

Ronaldo jumped to head home the cross. He seemed to have had contact with the ball before it looped into the net.

Ronaldo immediately flew into celebrations, thinking he had scored his second goal in the 2022 World Cup to increase his international goals to 118 and also March Eusebo’s record.

However, the goal was later awarded to his teammate Bruno Fernandes, who delivered the cross.

However, in another hilarious moment, Cristiano Ronaldo raised his two hands in shock and disbelief after he realized the goal was awarded to Bruno Fernandes

After the game, Ronaldo reportedly text his friend and veteran journalist Piers Morgan, saying the goal was his’

The debate over who actually scored the goal has continued, with some analysts giving to Ronaldo while others give it to Bruno Fernandes

As things stand, it appears the debate has been finally brought to its logical conclusion after Adidas ball sensor technology – 500Hz IMU built into the World Cup match ball – finally confirmed who scored the controversial goal.

The ball technology has awarded the goal to Bruno Fernandes after the hypersensitive technology confirmed that Ronaldo did not have even the faintest of touch on the ball.

After Fernandes’s name flashed as the true scorer of the goal, Ronaldo reportedly insisted that he actually scored the goal.

Now, a statement from Adidas has settled the controversy after examining the decision of the sensor.

”In the match between Portugal and Uruguay, using the Connected Ball Technology housed in adidas’s Al Rihla Official Match Ball, we are able to definitively show no contact on the ball from Cristiano Ronaldo for the opening goal in the game.

‘No external force on the ball could be measured as shown by the lack of ‘heartbeat’ in our measurements and in the attached graphic.

‘The 500Hz IMU sensor inside the ball allows us to be highly accurate in our analysis.’

Meanwhile, Portugal went on to take a 2-0 lead after Bruno Fernandes converted a penalty.

Bruno Fernandes still doubted his first goal, even when he had netted a brace and added it doesn’t matter who scored the first goal, but what matters is the team won.

Portugal tackles South Korea in their last group game and will be set to win the group after the game and Ronaldo will be expected to return to the lineup.

He was subbed off in the game and would have scored his 119th international if he was still in the game because he is Portugal’s first-choice penalty taker.

So far, Ronaldo has put behind his sad end at Old Trafford to concentrate on the 2022 World Cup and is flying high with the team, helping them bag two wins from two games.