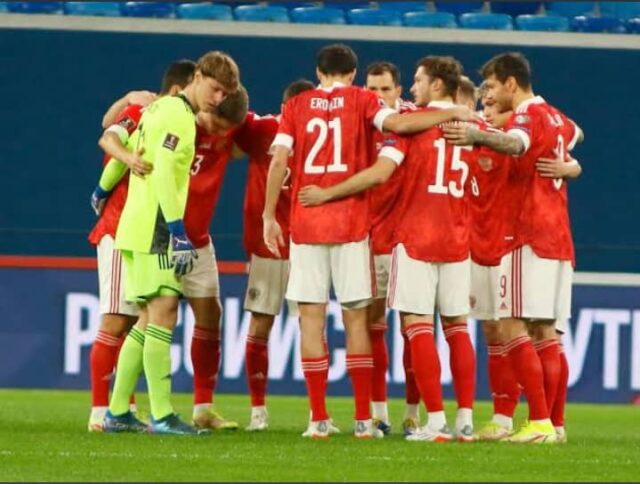 Russia will not participate in the draw for the Euro 2024 qualifying matches, according to confirmation from UEFA and the Russian Football Federation on Tuesday, September 20, 2022.

Russia is still prohibited from participating in the Euro 2024 qualifying rounds as a result of the ban imposed by UEFA after the invasion of Ukraine.

The ban of Russia from important competitions began in February 2022. Following the nation’s invasion of Ukraine earlier this year, the Russian national team and Russian clubs were expelled from international games.

In a statement, the governing body of football in Europe said: “All Russian teams are currently suspended after the decision of the UEFA Executive Committee on February 28, 2022, which has further been affirmed by the Court of Arbitration for Sport (CAS) on July 15, 2022.

“Russia is so excluded from the UEFA European Football Championship qualification draw for 2022–24.”

Note that the Russian team had initially earned a spot in the European qualifying round before the country’s president Vladimir Putin ordered the invasion of Ukraine.

The Russian Football Federation had filed an appeal against the ban to get the UEFA ruling overturned, but in July, CAS upheld the ban.

The Russian Football Union stated that it was waiting for the full language of the CAS judgment before deciding on further moves.

Recall that due to Russia’s invasion of Ukraine earlier this year, FIFA decided to bar Russia from the 2022 FIFA World Cup in Qatar.

As a result, it has been more than ten months since the senior men’s national team last competed.

However, this weekend’s friendly match between Russia and Kyrgyzstan will go on as scheduled.

Despite the ongoing international embargo, the Bosnian and Herzegovina football association has declared that a friendly match against Russia has been scheduled for November.

Germany will host the 2024 European Championship, and the qualifying draw is scheduled for October 9 in Frankfurt.

The interior minister of Germany has also demanded that Belarus be disqualified from the competition for supporting Russia.

The 53 remaining nations will be divided into seven groups of five teams and three groups of six teams as a result of Russia’s disqualification and Germany’s automatic qualifying.

The finals are attended by the 10 group winners and the 10 runners-up, with the remaining three seats being filled by playoffs that will take place in March 2024.

The 53 participating nations will be seeded and divided into seven pots by the 2022–2023 UEFA Nations League overall rankings.

Russia’s actions also had an impact on the 2022 Champions League final. The match was originally scheduled to take place in St. Petersburg, but just one day after the invasion, UEFA agreed to move it to Paris.

As it stands, it is not certain when Russia will be permitted to participate in any FIFA and UEFA competitions.