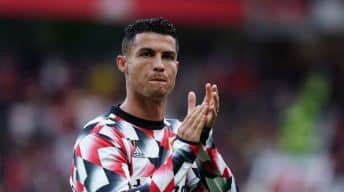 There have been speculations on the future of Cristiano Ronaldo after he mutually agreed to end his contract at Manchester United.

The former Juventus and Real Madrid forward slammed the Glazers for a lopsided and wrong handling of Manchester United.

He also tackled Erik Ten Hag for disrespecting him and said he does not respect the former Ajax manager either.

Ronaldo’s interview was met with a barrage of criticisms, with Manchester United immediately beginning the process of terminating his contract.

While Ronaldo braced for Portugal’s World Cup opener against Ghana, Manchester United issued a statement confirming the termination of his contract.

Ronaldo, on the other hand, issued a statement accepting the mutual termination of his £500,000-a-week deal with the Old Trafford club.

He is now a free agent and will be looking for a new club to continue his club career after the World Cup.

Before his tell-all interview, reports emerged that his agent Jorge Mendes had met with Bayern Munich representatives to broker a deal that would likely see his client join the Bundesliga giants.

He has also been linked to a Chelsea move, with Todd Boehly said to be a long-time admirer of the Portuguese star.

Amid speculations on his best stop after the contract termination with Manchester United, reports have emerged linking him to a potential move to the Saudi Arabian league.

Recall that the former Man United forward revealed in his tell-all interview that he had turned down a £305m deal from a Saudi Arabian club in the summer but didn’t mention the name of the club.

It was also confirmed that Manchester United had received an offer for the forward in the summer from Saudi Arabia, but the deal did not go through.

Meanwhile, it is still unclear whether this new interest will go through and whether Ronaldo will be willing to leave European football at this stage for Saudi Arabia.

Saudi Arabia sports minister Prince Abdulaziz bin Turki Al-Faisal has reportedly waded into the deal and revealed that not only Al-Hilal is pursuing the deal, but the whole of Saudi Arabia also wants to bring Ronaldo to its domestic league.

“Who wouldn’t want him to play in their league?” Prince Abdulaziz told Sky News about bringing Ronaldo to Saudi Arabian football. “He’s a role model to many young players – him and Messi.”

Meanwhile, Ronaldo is currently flying high at the 2022 World Cup with Portugal despite the adverse media reaction to his tell-all interview

He scored Portugal’s first goal, becoming the first player to score in five consecutive World Cups as Portugal started their World Cup campaign with a 3-2 win over Ghana.

Reacting to the goal, Ronaldo said;

“This was a beautiful moment. The world record, the only player to score in five World Cups, makes me very proud.

“It was a week that finished this chapter (with United),” Ronaldo added. “It is closed and now I want to start with the good foot forward. We started, we won, I want to help my team and all the rest does not matter.”

It is still unclear whether Ronaldo will join the Saudi Arabian side after a heroic spell in the Premier League. He has consistently reiterated the need to return to the Champions League.

His advanced age and the lack of interest from other top clubs could possibly influence his decision to join any club outside Europe.