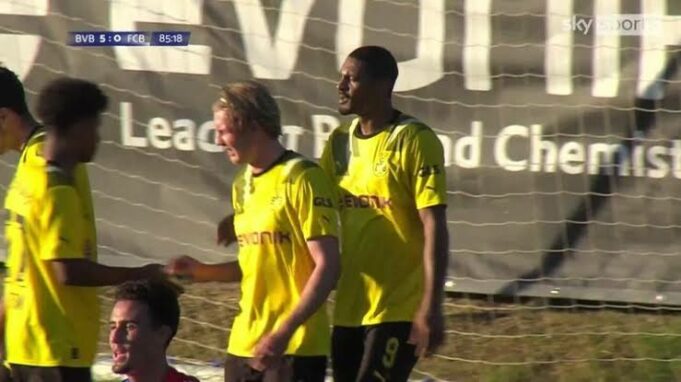 Sebastien Haller scored a remarkable hat-trick in the seventh minute of his fairytale return to the Borussia Dortmund starting XI following his cancer diagnosis.

Recall that the Ivory Coast international faced a difficult treatment regimen after being diagnosed with testicular cancer in the summer of 2022.

Haller was given the go-ahead to resume full training this month and made his comeback as a replacement in a friendly matchup against Fortuna Dusseldorf earlier this week.

The 28-year-old received extra playing time versus FC Basel in a friendly match for Dortmund, which he dispatched of in double-quick time.

Haller scored twice more in the 86th and 87th minutes after opening his account from the penalty spot in the 81st minute.

Quick to comment were football lovers, with one fan tweeting: “Things you love to see.”

Haller is expecting that he will soon be back in charge of Dortmund’s offensive line for their competitive games.

The Ivorian stated that: “I want to play as quickly as possible. There are no limits and restrictions on my involvement unless the medical staff tell me otherwise.”

“I can do everything now that I used to do before, that gives me great confidence.”I took only 19 days off in the six months. It was hard but it’s my job and I love it.”

“Retiring was never on my mind, I had the mindset of looking forward and take every day at a time.”

A week from Sunday, Haller and his teammates from Dortmund will return to the Bundesliga when they host Augsburg at the Westfalenstadion.

Haller started his professional career at Auxerre in France. In 2015, he moved on loan to Dutch Eredivisie team Utrecht before making a permanent commitment.

He transferred to the German team Eintracht Frankfurt two years later, where he won the DFB-Pokal in 2018.

A year later, West Ham United of the English Premier League acquired him for a club-record fee of €49.8 million (£45 million).

He captured the Eredivisie and the KNVB Cup in his first half of the season. During the 2021–22 season, he became the first player to score in seven straight UEFA Champions League games.

He later moved to Borussia Dortmund for an initial €31 million.

Haller, who was born in France to an Ivorian mother and a French father, first represented France at the youth level before 2020, when he decided to support the Ivory Coast.

He played for his country at the 2021 Africa Cup of Nations and scored his first goal against Madagascar.

What Happened To Haller?

In July 2022, the 28-year-old reported feeling sick after training.

The Ivory Coast International was scheduled for additional testing at a specialized medical facility after further investigations showed the presence of a tumor.

Haller replaced Erling Haaland in this summer’s transfer from Ajax to Dortmund after the Norway international joined Manchester City.

He was very effective in the Champions League for Ajax last season, scoring 10 goals alone in the group stage. In all of the competitions, he scored 32 goals.

We’re pleased the lad is back and firing—and, what’s more amazing, in less than seven minutes.

This just demonstrates the football skills of the Ivorian and what we should expect going forward.