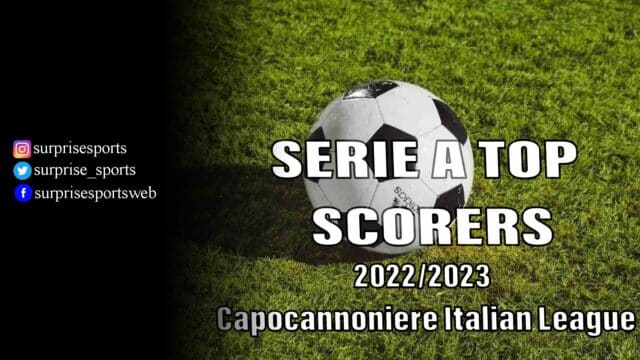 Serie A Top Scorers 2022/2023: The top scorers in the Italian Serie A 2022/2023 are called to compete for the European Golden Boot. The trophy for the highest scoring player in the championship receives the Capocannoniere badge, which has had Cristiano Ronaldo as the protagonist in recent seasons.

Ciro Immobile has been in charge of raising the bar in recent seasons. The competition with Vlahovic, Lautaro Martínez, or Giovani Simeone is expected to leave a scoring trophy worthy of Calcio. Serie A will feature top-level strikers.

All Time Top Scorers in the Italian League Serie A

*In bold are the players who are still active.

Related
Thibaut Courtois Ranks Top As The Most Valuable Goalkeeper In The World .... See Others

Players With The Most Capocannoniere Titles

These are the players who have won the Capocannoniere title the most times, proclaiming themselves top scorers at the end of the season. The Swedish Gunnar Nordahl stands out with 5 awards in the decade the 50s.

Countries With the Most Titles in Serie A