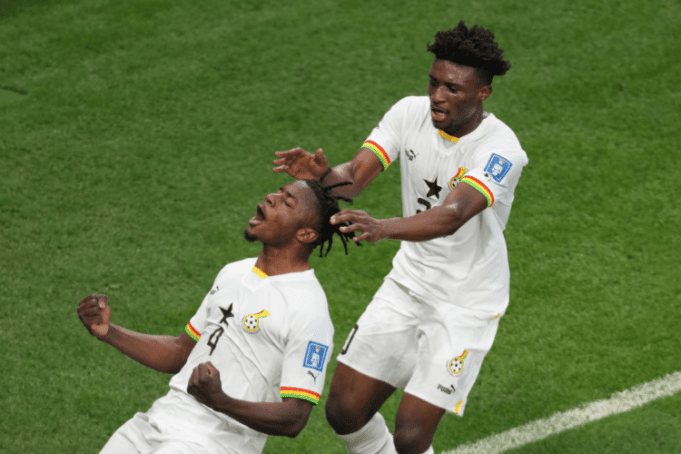 Both teams were searching for their first victory in the Qatar World Cup. Recall that Ghana suffered a lost against Portugal (3-2) and South Korea had a goalless draw with Uruguay on Thursday.

Before now, Uruguay and Portugal were heavily favored in the group, thus both sides need a victory to maintain their chances of progressing to the knockout rounds.

Even though there were visible vacant seats at the stadium, there was plenty of chants, horns, drums, and Vuvuzela resonating throughout Education City Stadium.

It appeared that there were roughly equal numbers of South Korean and Ghanaian supporters cheering for their respective teams in the arena.

Partey, who is frequently Arsenal’s enforcer, had trouble taking control of the midfield in the opening 10 minutes.

The Ghanaian team were playing as if they already had a point in the group, when in reality they were facing knock out if they had failed to win.

In the 23rd minute of the game, just when it seemed like Ghana wasn’t serious, they made a significant contribution.

Mohamed Salisu of Southampton was present and was the first to respond to a superb freekick delivered into the box.

During the ensuing bustle after Jordan Ayew’s dangerous free kick into the box, Salisu, 23, turned and scored on instinct.

After scoring, Ghana appeared to have the game under control and looked more dangerous than their opponents.

The Ghanaian spectators in the stadium also discovered their voices as the game progressed.

Sometimes, football is a harsh game. Up until the Ghana’s set piece, which bounced off a few people before being buried by Mohamed Salisu, South Korea had been completely in control of the game.

Mohammed Kudus made his way to the back post and tipped the ball into the goal after another really exquisite throw.

In the 32nd minute, Jordan Ayew once again produced a beautiful ball. The first goal was unexpected, but the second goal was entirely deserved by the Black Stars.

Mohammed Kudos scored his sixth goal for the Black Stars in twenty appearances.

The twenty-two-year-old has been outstanding for Ajax this season and appears to be the real deal.

Inaki Williams was posing problems for South Korea with his movement and strength as the Black Stars played with such poise and confidence.

At this point, South Korea had lost its way in the match after first appearing assured and aggressive. That demonstrated how much an aim may influence events. There are a few confused individuals that support Paulo Bento.

Kwon Chang-Hoon forces Zigi to make a good save, but Son was offside so the flag was ultimately raised.

Jordan Ayew enjoys facing South Korea; in their most recent meeting, the Crystal Palace attacker scored a hat-trick for Ghana.

Before being reinserted into the starting lineup for today’s game, he had already registered two assists and was perhaps the best player on the field.

At the end of the first half, with five minutes remaining, it appeared that Ghana would lead by two goals at the halftime.

They have been as effective in front of goal as you could hope for – Two shots were successful – Two goals.

After Lawrence Ati-Zigi made that spectacular save from a Jo Gue-sung header. South Korean fans erupted in jubilation as the second half got underway.

In the 57th minute for the Asians, Jo Guesung scores for South Korea.

Guesung skillfully headed in Kangin’s cross from the left after he made an immediate impression as a substitute.

South Korea added another goal three minutes later with a beautiful pass and header by Guesung.

The South Korean fans’ unbridled passion burst throughout the stadium.

When Kim Jin-Su reached the byline, she immediately hung it out in an inviting manner toward the back post.

Cho Gue-Sung, who towered over Ghana’s defense in the opening seconds, climbed to the top and powered the header in.

Mohammed Kudus, the man of the moment made it 3-2 for Ghana in the 68th Minute!

Mensah rolled the ball across the goal area, and Inaki Williams formed to shoot. He misfired, but nevertheless managed to deflect his shot into Kudus’s path.

He took a touch and curled the ball beyond Kim Seung-Gyu with confidence, poise, and coolness to retake the lead for Ghana.

That Kudus goal re-energised the Ghana supporters, who were back to cheering their team as they had done in the first half.

The South Koreans, on the other hand, were not relenting despite the fact that some of their supporters appeared as though they were finding it difficult to continue watching the game. They were clinging to friends and relatives out of anxiety.

At 22 years and 118 days old, Mohammed Kudus is the second youngest African player to score two goals in a World Cup match, after Ahmed Musa (21y 254d) for Nigeria against Argentina in 2014.

When Cho Gue-Sung considered the possibility of a hat-trick, his eyes briefly lighted up. His strike toward the near post was effective despite the difficult angle.

However, it wasn’t good enough, and Zigi parried it away as there were 10 extra minutes.

When Anthony Taylor blows for full time immediately after South Korea had earned a corner, the South Koreans are not happy.

After the final whistle, Paulo Bento confronts Taylor in a rage and receives a red card. But what a game, back and forth the whole time.

Great victory for Ghana. Mohammed Kudus was the game’s victor.