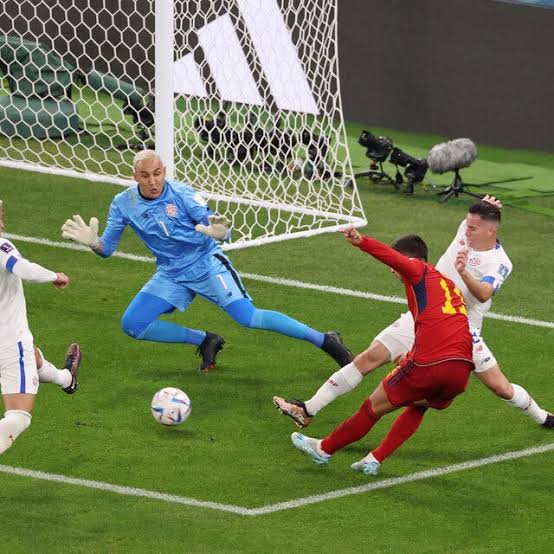 Spain vs Costa Rica: Spain showed total dominance against Costa Rica in the World Cup after humiliating them with seven goals. This provides a statement that the Spanish side is a World Cup contender and is not to be written off.

Pedri produces a fantastic ball over the top of the Costa Rica defense to the back post, where Olmo is waiting, and strikes the ball on the volley in the 5th minute, but he was disappointed not to hit the ball on target.

Pedri, who has seen a lot of the ball, opened Costa Rica’s defense in the 9th minute and passed it to Asensio, who used his right foot to play the shot, which went wide.

Jordi Alba found space and picked Gavi, who was compose from the kick-off of the match. He then left the ball in Olmo’s path, who scored a beautiful goal past Navas in the 11th minute.

In the 15th minute, Gavi showed his quality and dribbled past Calvo, who drew him down in the midfield, giving the Spanish side a chance to play a free kick into the 18-yard box.

Spain got the double from Marcos Asensio, who received an excellent cross from Jordi Alba in the 21st minute. Costa Rica goalkeeper Navas got his hands on the ball, but it was not enough to stop it from going into the net.

This came after Costa Rica had a long spell on the ball.

Ferran Torres scored a penalty in the 31st minute of the match after Jordi Alba was fouled in the 18-yard box.

in the 46th minute, Costa Rica made a change at half-time. Martinez was replaced by Waston.

Spain scored the fourth goal of the match, with Ferran Torres getting on the score sheet in the 54th minute.

It was an easy one for the Barcelona striker; his first attempt was blocked by the Costa Rica defenders, but they were unable to stop the second attempt on goal.

Spain made their first change of the match by substituting Ferran Torres and Pedri for Alvaro Morata and Soler in the 57th minute.

In the 62nd minute, Costa Rica made more changes, as Ruiz and Zamora came on for Bennette and Contreras.

Spanish right back Blade was brought in to replace Jordi Alba in the 64th minute. Koke also replaced Sergio Busquets in the midfield.

The first booking came in the 68th minute, after Costa Rican Calvo launched himself at Spain’s Soler. Luis Enrique decided to bring in more fresh legs as William replaced Asensio.

Soler, who was introduced recently, scored in the 90th minute after receiving a teasing cross from William. Costa Rica goalkeeper Navas got his hands on the ball and pushed it into Soler, who tapped in the ball.

In the 90+2 minute, Morata scored a beautiful goal after a one-two pass at the edge of the box. What a message the Spanish team sent to the opposing team!

Campbell goes into the book for Costa Rica after a late challenge on Balde in the 97th minute as the team received the heaviest defeat in the ongoing Qatar 2022 World Cup.