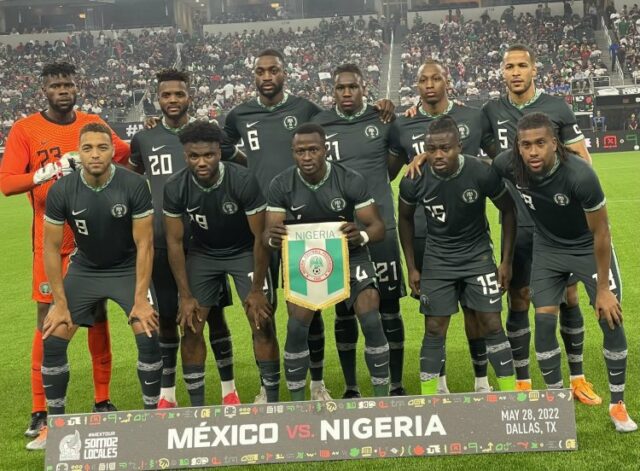 Afican giants Algeria will now know the set of players they are going to face from Nigeria as they get ready to battle the Super Eagles in a highly anticipated international friendly match. New head coach of the Super Eagles Jose Peseiro was forced to delay the squad announcement after some star players suffered injury blows.

There are some surprised additions and omissions from Jose Peseiro squad as the team prepares to take on Algeria. Henry Onyekuru, Kevin Akponguma, and Chidera Ejuke have all returned to the team, including Watford goalkeeper Maduka Okoye and Leicester midfielder Wilfred Ndidi.

Key and notable names missing from Jose Peseiro’s list is Napoli prolific forward Victor Osimhen and Samuel Ajayi. Both had to be left out of the squad due to injury blows. Meanwhile, Raphael Onyedika who had been prolific in the midfield position for Belgium giants, Club Brugge, is set to make his debut for the Nigeria national team after being named in the squad.

There are known and regular names in the squad which include Samuel Chukwueze, William Troost-Ekong, Leon Balogun, Moses Simon, and team Captain Ahmed Musa

Meanwhile, after the Nigerian Football Federation extended their contract with Nike as the official manufactures of the Super Eagles kit till 2026, Nike confirmed the release of a new Super Eagles kit on Thursday 15 September, 2022. The kits are available on Nike.com

The Super Eagles are expected to wear the new kits as they take on the Desert Foxes at the Oran Olympic Stadium on Tuesday, September 27.

After the Algeria friendly, the Super Eagles will trade tackles with Portugal in another friendly match scheduled to take place at the Estádio José Alvalade in Portugal on November 17, 2022.

Nigeria will take on Algeria at 08:00 P.M. Nigerian time, while the kick-off time for the Portugal friendly is yet to be decided. The matches will be streamed live on HESGoal, BeinSport, and other online streaming platforms.

Nigerians’ new Nike jersey will be missing from the 2202 World Cup after a doubleheader final round clash with the Black Stars of Ghana ended in a 1-1 draw. The Super Eagles played a 0-0 draw with Ghana away and settle for a 1-1 draw at home. The Black stars qualified on away goals advantage.

The four countries that will represent Africa in the 2022 FIFA World Cup include Senegal, Morocco, Tunisia, and Cameroon. Portugal decided to play a friendly game against Nigeria since Ghana is placed in the same Group as Portugal. Other countries in the group are South Korea and Uruguay. The World Cup will kick off on November 20, 2022.