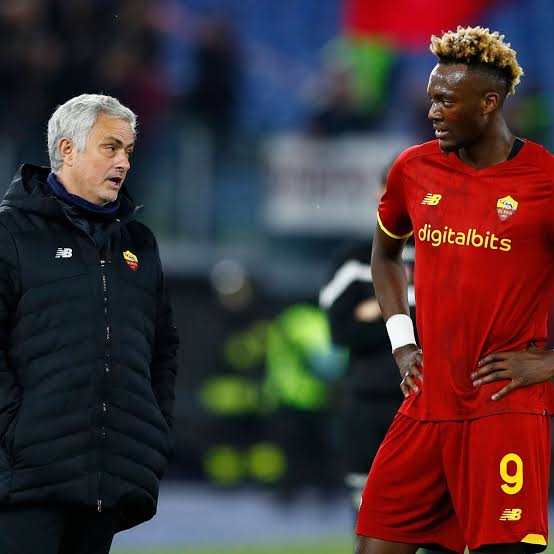 Jose Morinho couldn’t paddle his team to victory against rival Atalanta as Gasperini’s side thrashed Roma 1-0 on Sunday, September 18, 2022, to sit second in the Serie A table.

The 24-year-old Roma attacker, after Sunday’s Serie A match, had a lengthy interview with Daily Mail and revealed his role at Roma as well as his partnership with 28-year-old Argentine forward Paulo Dybala.

On Dybala, Tammy Abraham said: “He’s talented. As good as he is on FIFA. He brings leadership qualities as well even though he looks like he’s 12 years old!

“He’s got that experience of winning trophies at Juve which is what we needed.
It’s good for me personally, we are building that partnership.”

Paulo Dybala is known for his fast pace and skillful run. He can provide assists and can also score lots of clinical goals. In FIFA 22, Dybala got a rating of 87 and a potential of 87.

So far this season, Dybala and Abraham have been combining to boost Roma’s chances of winning games. The atmosphere has changed since Dybala joined the team this summer, July 20, 2022.

Both Tammy and Dybala scored to give Roma victory against Empoli in their Serie A clash on September 12, 2022, as Paulo Dybala registered an opener in the 17th minute.

Filippo Bandelli equalized for Empoli before Tammy Abraham converted a brilliant assist from Dybala in the 71st minute to put AS Roma back in the lead.

Tammy Abraham admitted he was confident and satisfied with his performance at Roma. However, it is being speculated that Jose Mourinho rates Paulo Dybala’s arrival at Roma over that of Tammy Abraham a season earlier.

Abraham confessed that he has never heard a “well done” from the Roma coach, not even on occasions when he helped the team to victory.

Abraham told Daily Mail reporters that: “He [Morinho] is one of the best for man-management.

“He knows how to speak to players, and the best way to deal with each one. In my case, he never tells me how well I am doing. At half-time, I never get a ‘Well done even though in the back of my mind I am thinking, ‘You know I’m playing well. He always wants you to do better.

Despite the strict relationship that exists between Tammy and coach Mourinho, Tammy revealed that he sees Mourinho’s chastising as encouragement and impetus for him to improve and do better on the pitch.

Tammy continued: “Before the Europa Conference semi-final against Leicester last season, he dragged me into a room and said: ‘Tam, I don’t think you have been good enough’.

“I was surprised because I had scored in the previous game! I asked what he meant and he said he wasn’t seeing the Tammy he saw play against Lazio for example. It was motivating and I did end up scoring the winner against Leicester.”

Meanwhile, The 25-year-old England national team attacker has helped Roma win four of their six opening Serie A matches to land in sixth place, and one of their two Europa League matches, defeating HJK after an awful loss on Matchday 1 to Ludogorets.

Jose Mourinho blasted Tammy Abraham, despite his equalizer, describing his performance as ‘horrible’ in their 1-1 Serie A match draw with Juventus last month.

Juventus took the lead through Dusan Vlahovic first half goal but the England international and former Blues’ star, Abraham equalized in the second half after converting Dybala’s fine assist to earn a point for Mourinho’s side.

After the match, Tammy spoke with reporters, saying he was satisfied with his performance but Roma boss Mourinho asserted he was disappointed with the 24-year-old’s output and instead, praised Paulo Dybala as the best Roma player of the night.

Related
What Does FC Stand For in Soccer?

Mourinho said: “Dybala always makes the difference. At the beginning of the second half, he was not able to make two passes, but then he improved. I know how things work.”

Mourinho speaks in Abraham’s interview, where the 24-year-old declared he was satisfied with his performance but the Portuguese coach said otherwise.

Mourinho said concerning Abraham: “I saw Abraham’s interview. Apparently, he played a great game but it was horrible. Dybala played well. I am really happy with Paulo.”

The former Blues star has been thriving in Italy since he joined Roma from Chelsea in the summer of 2021. Abraham netted 27 goals in all competitions last season as the Giallorossi won the inaugural Europa Conference League under coach Mourinho last season.

The 24-year-old strongly believes in himself and doesn’t seem upset or embarrassed with Mourinho’s comment on his output, instead, Tammy saw it as a challenge to aid his personal development.

Moreover, with the 2022 Qatar World Cup around the corner, Abraham will be looking forward to proving his worth and impressing Gareth Southgate in the upcoming international break.

Do you think Mourinho is being fair for celebrating Dybala but criticizing Abraham’s performance? You can drop your comment in the opinion box below.