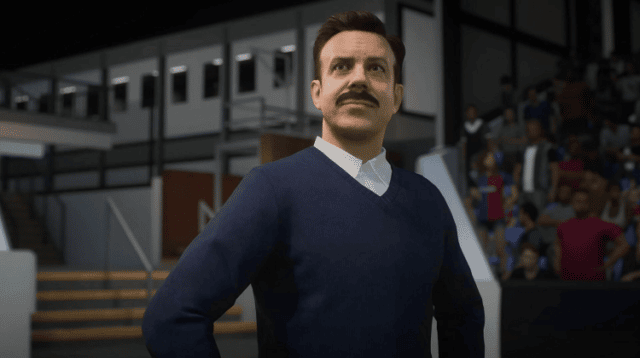 Ted Lasso And AFC Richmond will be included in FIFA 23 as FIFA has confirmed that the movie series belongs to the game and will be playable starting 30 September 2022.

In Career Mode, Kickoff, Online Friendlies, and Online Seasons, the football club will be playable.

In addition, you will receive several AFC Richmond goods as you unlock them in FIFA Ultimate Team and Pro Clubs, as appropriate, including uniforms, manager items, and other materials.

“As long-time fans of FIFA, having Ted Lasso and the whole AFC Richmond squad incorporated into the newest version of the game is truly a dream come true for myself and the rest of the fellas,” said Sudeikis, the brain behind the series.

“Our cast and crew work tremendously hard on this show, and we are flattered that it resonates with so many folks.”

“In a short time and with limited prior experience, Ted Lasso has become a cultural phenomenon, bringing the passion of football and the power of belief to life for millions of fans across the globe,” said David Jackson, VP of brand for EA Sports FIFA. “We’re thrilled to welcome both Ted and AFC Richmond to FIFA 23.“

A faltering Premier League club is being led by an American football coach in the popular movie series Ted Lasso, starring Jason Sudeikis as the title character.

Alongside a group of funny, largely British actors, the constantly upbeat Lasso provides the ideal balance of humor and tenderness while having little to no expertise in the game or British customs.

Who is Ted Lasso?

A sports comedy-drama television program called Ted Lasso was created by Jason Sudeikis, Bill Lawrence, Brendan Hunt, and Joe Kelly. It is based on a persona by the same name that Sudeikis first played in several advertisements for NBC Sports’ Premier League coverage.

In an effort to spite her ex-husband, the team’s owner hires Ted Lasso, an American college football coach, to lead an English football team. Lasso, who is grappling with his lack of experience in the sport, seeks to win over the sceptical English market with his folksy, upbeat manner.

On August 14, 2020, the first three episodes of the season’s ten total episodes debuted on Apple TV+. Thereafter, new episodes were released every week.

Who will be playable for AFC Richmond in FIFA 23?

FIFA invested much in this crossover. Along with other team elements, the game will feature the stadium, uniforms, and tifos of AFC Richmond.

Many of the beloved on-field characters are certain to be in the next video game, even though it’s uncertain whether the complete diamond dog quartet will be playable.

In the first two seasons of the program, Brett Goldstein won back-to-back Emmys for Outstanding Supporting Actor in a Comedy Series thanks to the performances of Jamie Tartt, Sam Obisanya, Dani Rojas, and the recently retired Roy Kent.

On Wednesday, Goldstein commented on the news, stating he had huge plans for his character.

“I look forward to beating my nephew in a game with me as Roy Kent and him as Jamie Tartt,” he said. “He’s gonna be furious.”

Lasso and other real-life managers, such AFC Richmond, will be available for players to pick from, according to FIFA.

Where will Ted Lasso And AFC Richmond players be available on FIFA 23?

The Greyhounds will instead be listed under the “Rest of the World” section.

Will Ted Lasso And AFC Richmond players have ratings?

The stakes and opportunities associated with choosing to represent the Greyhounds as a player include player ratings.

Actor Phil Dunster guessed where his character, Jaime Tartt, may rank even though the full player ratings are not yet available.

“I think Jamie is 25. … Listen, Harry Kane’s been playing for England. It’s hard to be an English striker because Harry Kane is always fit,” Dunster told ESPN. “So that’s probably why [Tartt] hasn’t been like at the top, top, top of his game, haven’t given the opportunities. But he was at City — really, really promising player. So with all of those things in mind, I reckon he’s — I’m going to say overall 84.”

When will FIFA 23 be available?

FIFA 23 is coming up in just over a week after great anticipation.

On September 27, the Ultimate Edition will go on sale for early access, and on September 30, it will be accessible worldwide.

Despite the popularity of the show, AFC Richmond still has a long way to go before any Greyhounds appear on the FIFA game cover.

Instead, the French striker Kylian Mbappe of Paris Saint-Germain and the Australian forward Sam Kerr, who presently plays for Chelsea, will be featured on this year’s cover. With her debut, Kerr becomes the first female football player to be featured on the game’s front cover.