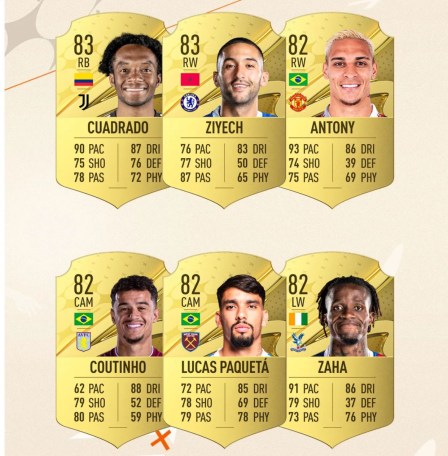 Various players are blessed with different skills and talents. FIFA 23 rating has given the game’s biggest names and most talented players five stars based on their skills on the ball.

Kylian Mbappe has been rated 5 stars because of his impressive performance with PSG last season. He is also part of those players with the highest rating in the game with 91.

Neymar Jr., another PSG player, is on the list with an 89 overall rating. The Brazilian helped his national team qualify for the World Cup in 2023 and he is currently in fine form with more than ten goals this season for PSG.

Cristiano Ronaldo is the second highest rated five-star player at 90 overall rating. The 37-year-old Portuguese forward suffered a reduction from 91 to 90 after a very poor season and a failure to make it to the Champions League last season, even with his 18 goals in the tournament.

Juventus is the second club with the most five-star skills players. The three players from club listed are: ( Paul Pogba rated 85, Angel Di Maria rated 84, and Juan Cuadrado with 83 rating).

The only Chelsea player on the five-star skills list is Hakim Ziyech  with an overall rating of 83.

Vinicius Jr, who was rated 86 by FIFA, is the only Real Madrid player on the list. The winger is already writing his name into Real Madrid history with consistency and is showing how good he is.

Christopher Nkunku, who was in form for RB Leipzig last season, with an 86 FIFA 23 Rating, also made the list.

Kingsley Coman, who plays for the German side Bayern Munich, rated 86, also made the five-star skills rating.

Liverpool have two players on the five-star list. These players are Roberto Firmino, rated at 83, and Spanish midfielder Thiago, rated at 86.

Manchester City Riyad Mahrez, rated at 86, has also been given five-star skills rating.

Barcelona Memphis Depay and Ousmane Dembele, rated at 85 and 83, were among the players on the five-star skills list.

Atletico Madrid’s Joao Felix, with an 84 FIFA rating, is also part of the players after an impressive performance in the Champions League with the team.

Martin Odegaard is the only Arsenal player on the list with an 84 rating.

Allan Saint-Maximin, a Newcastle winger with a FIFA rating of 81, is also among the 5 star players.

Zlatan Ibrahimovic, who plays for AC Milan as a striker with an 82 rating, is also part of the list. However, he has been nursing injuries and is not in any mood to look for retirement.

Aston Villa attacker Philippe Coutinho, rated at 82, still remains a five-star player even though he has failed to get into Stevie Gerard’s team this season.

Crystal Palace winger Wilfred Zaha, who has always been consistent for years and is rated at 82, is also on the list. West Ham’s new signing, rated at 82, is ranked 20th on the five-star list.

Silas, rated at 75, who plays as a right midfielder, was given five stars. Harit, from Morocco, who also plays for Olympic Marseille, is rated 75.

Jota, who plays for Scottish league champions Celtic and Portugal, also made the list with a 76 rating. Matheus Pereira, who plays as an attacking midfielder, is rated at 76.

The former Liverpool winger Shaqiri made the list too. The French veteran Frank Ribery was also among the five star players in FIFA 23.

Argentina’s Acosta, who was rated at 76, got a chance to be there. Igor Coronado with a 77 rating and, finally, Moreno with a 76 are five-star skills players on FiFA23.