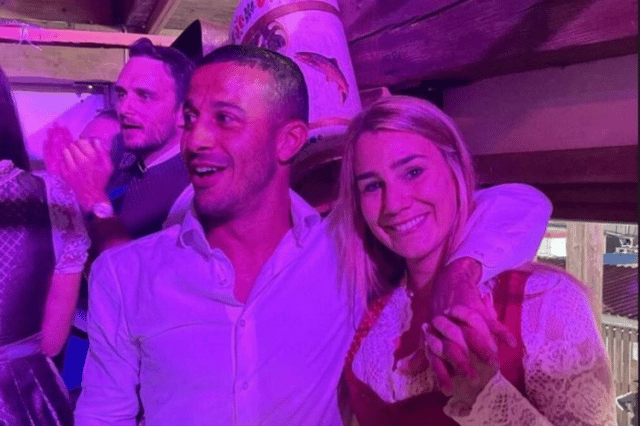 Thiago Alcantara of Liverpool FC, recently traveled to Munich for Oktoberfest with his wife Júlia Vigas to celebrate the world’s largest Volksfest in Bavaria, Germany.

Before signing for the Reds for £20 million, he played for Bayern Munich from 2013 until 2020. The 31-year-old has had a season marred by injuries thus far. Recall that he was forced off against Fulham in the season opener due to a hamstring issue.

He did, however, make a triumphant comeback to the starting lineup. He turned in a player of the match performance in the 2–1 Champions League victory over Ajax on September 13.

Due to his absence from the Spain squad for the next international matches, Thiago can now take a lengthy break before LFC’s next match against Brighton.

During the break, Thiago and his wife Julia Vigas visited their previous hometown. The delighted pair celebrated the festivities of the renowned beer festival in traditional Bavarian garb.

The post’s caption read: “Always a Bavarian. Oktoberfest in München.”

As they anticipated the goalkeeper’s return to Merseyside, supporters swarmed the comments section to support him.

Thiago Alcântara do Nascimento, a professional football player for Liverpool of the Premier League and the Spanish national team, was born on April 11, 1991. He plays central midfield.

He is the oldest child of former player Iomar do Nascimento Mazinho and was born in Italy to Brazilian parents. At the age of 14, Thiago joined Barcelona, and in 2009, he made his professional debut.

Bayern Munich signed him for €25 million in 2013 after achieving accolades including four La Liga championships, the UEFA Champions League, and the FIFA Club World Cup for Barcelona.

In Germany, Thiago won 16 titles, including the UEFA Champions League as part of a continental treble in his final season with the team and the Bundesliga seven times in a row. Afterward, he transferred to Liverpool in 2020 for an initial fee of £20 million. He won the FA Cup in 2022 with Liverpool.

Mazinho, a former professional footballer who won the 1994 World Cup and 1989 Copa America with Brazil, is the father of Rafinha and Thiago Alcantara.

Valéria, the mother of the brothers, used to play volleyball.

Despite being of Brazilian descent and having been born in Italy, Thiago made his international debut for Spain after relocating there at the age of 14.

Rafinha, who was born in Brazil before relocating to Spain, chose to represent the former country in international football despite having played for Spain at various juvenile levels.

Thiago Alcantara and Rafinha have always played on opposing teams, never on the same side.

The most outstanding of that was in the Champions League semifinal first-leg matchup between Thiago’s Bayern Munich and Rafinha’s Barcelona, which Barcelona won 3-0.

Julia Vigas is blissfully married to Thiago Alcantara. Spanish entrepreneur Julia is well-known on Instagram, where she has about 141k followers.

When Thiago was playing for Spanish powerhouse FC Barcelona in 2012, he first encountered Julia Vigas.

Shortly after, the pair began dating, and they developed a serious relationship. When Thiago left Barcelona to join Bayern Munich in 2013, Julia moved to Germany with her then-boyfriend despite having a prosperous business in Spain.

Who is Thiago Alcantara’s Dad?

The former Brazilian footballer and World Cup champion from 1994, Mazinho, is the father of Thiago. His mother, Valéria Alcântara, played volleyball for Brazil in the past.

Rafinha, his younger brother, is a player for both the Brazilian national team and Paris Saint-Germain. Rodrigo, who also represented Spain, is a close friend rather than a cousin, as has been falsely claimed.