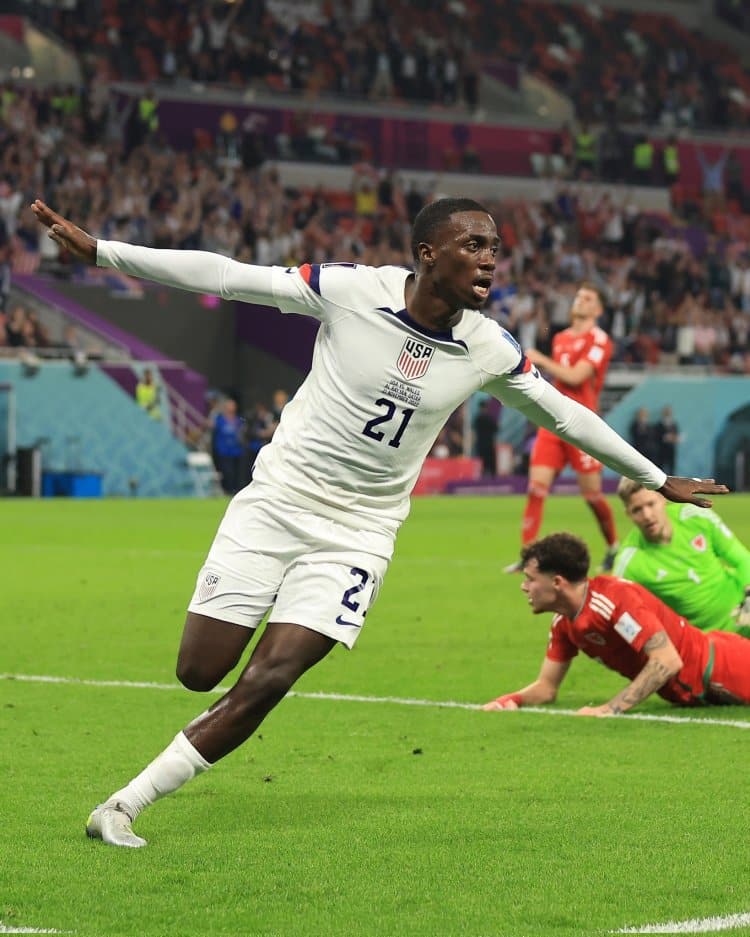 Timothy Weah, the son of Liberian football icon George Weah set the USA on a fair World Cup campaign after slotting their opening goal against Wales in their World Cup opener that ended in a 1-1 draw.

The 22-year-old Liberian-born striker and son of the Liberian president got the USA up and running when he hurried ahead of the Wales defense to shoot in the USA’s opening goal of the 2022 World Cup competition.

The 22-year-old USA forward is the son of former AC Milan player George Weah who also played for Monaco and Paris Saint Germain, and won the Ballon D’Or in 1995 with the Rossoneri.

Despite being the only African player to win the Ballon d’Or, George Weah has never played nor scored in a FIFA World Cup competition. The feat he couldn’t achieve, his son, Timothy, has achieved it in the colors of the USA on Monday, November 21, 2022.

Unlike his father who carried Liberia on his shoulders then, Timothy is one of the outstanding players among the current USMNT squad as he didn’t choose to play for his father’s land.

Having won the Ligue 1 title three times, twice with PSG and once with Lille, the 22-year-old forward has continued to exhibit the immense commitment he showed with the likes of PSG, Celtic as well as the Ligue 1 side Lille.

The USA national team started their opener powerfully dominating Wales and striving to get the lead in the first half of the match in Qatar.

USMNT’s strive later saw a breakthrough in the 36 minutes when Timothy Weah gave them the lead.

The 22-year-old Lille forward attacker raced onto a nice through ball from Chelsea star, Christian Pulisic and slotted the ball beyond Wales goalkeeper Wayne Hennessey.

However, Wales retaliated via a late equalizer after Walker Zimmerman knocked Gareth Bale from behind in the box and the referee awarded them a penalty.

Gareth Bale took the shot for Wales and scored, slotting the ball with his left foot past Matt Turner who was close to denying the opportunity.

The United States national team Coach Gregg Berhalter will feel vindicated for giving Timothy a place in the starting XI, as many expected to see Brenden Aaronson or Giovanni Reyna get the spot ahead of him.

Who is Timothy Weah?

George Weah played for Monaco, Paris Sanit Germain, and A.C. Milan, and became the only African to win the Ballon D’Or in 1995 with the Rossoneri.

Timothy is a rising talent who started his career with West Pines United, in Florida and arrived at stardom when he signed a three-year professional contract with French club Paris Saint-Germain on July 3, 2017.

He spent most of the season with the under-19 squad in the UEFA Youth League before moving to Celtic on a six-month loan deal on January 7, 2019.

Afterward, on June 29, 2019, Timothy Weah signed a five-year contract with Lille.
The 22-year-old son of Liberian president George Weah made his debut for Lille on August 11, 2019, starting in a 2–1 home victory over Nantes.

Timothy made a total of 81 appearances for the French side since his arrival in 2019, scoring eight goals.

The 22-year-old Lille forward has won the Ligue 1 title three times, twice with PSG and once with Lille.

Why is Timothy not playing for Liberia?

Timothy Weah, the son of a former professional soccer player, Ballon d’Or winner, and President of Liberia George Weah shocked the World with his decision to neglect his home country and play for the USA.

Timothy had the choice to play for four different countries, namely: France, Jamaica, Liberia, and the United States of America but he chose the USA since that is where he grew up.

For the USA national team, Timothy earned his first senior international cap for the United States in 2018.

The 22-year-old forward has gone on to accumulate 25 appearances, scoring three goals and assisting two.

George Weah was a highly talented and legendary goal scorer who played for Monaco, Paris Sanit Germain, and A.C. Milan and won the Ballon D’Or in 1995 with the Rossoneri.

Weah attained the height of his football career in 1995 when he won the Ballon d’Or after establishing himself as the best in the Ligue 1 with Paris Saint-Germain and Serie A with AC Milan.

To date, Weah is the only African footballer to have ever received the Ballon d’Or honor.

George Weah is the current president of the African country Liberia, holding the position since he was sworn-in in 2018.

While George Weah, now the president of Liberia, would hopefully watch his son make more exploits for the United States, USMNT will take on England in their second game on November 25.