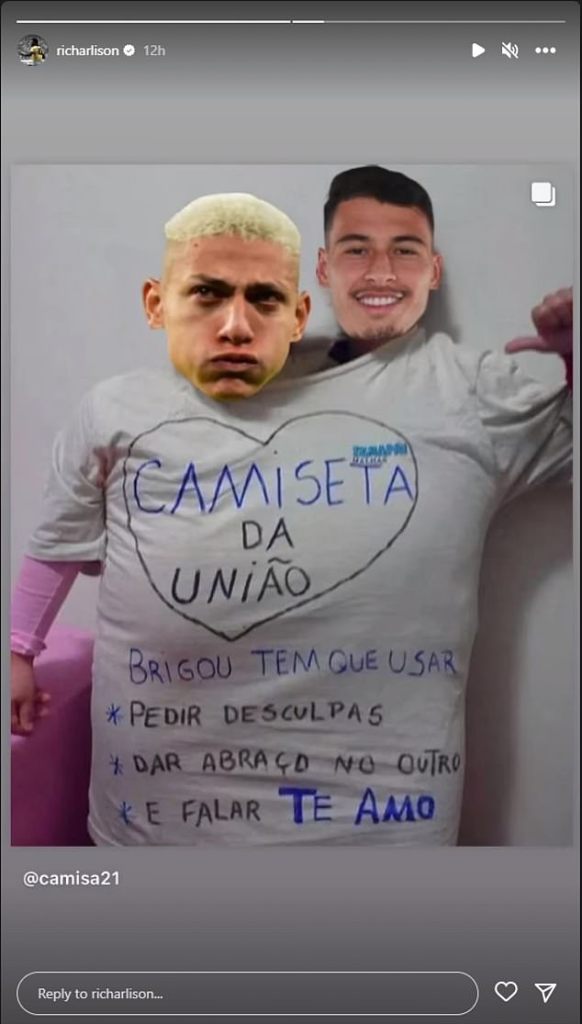 Tottenham star Richarlison has apologized to his Brazil teammate Gabriel Martinelli after a faceoff in the North London Derby.

While Arsenal claimed three points off their North London rivals, the match descended into chaos with Richarlison at the center of the chaotic scenes.

Tottenham’s loss to Arsenal was a record-breaker. For the first time since 2014, Arsenal took all three points off Tottenham in front of their home fans. No thanks to an own goal by Hugo Lloris, and Eddie Nketiah’s strike.

Richarlison was furious after the loss and was at the center of the boiling tempers that marred the game after the final whistle.

First, an eagle-eye spectator spotted Richarlison slapping off the hand of an Arsenal defender Tomiyasu at the touchlines when the latter attempted to restrain him from interfering with Arsenal’s throwing.

The incident happened before Richarlison was subbed into the game by Antonio Conte.

After coming on, Richarlison sparked a near-brawl that ensued at the end of the game. In a viral footage, the Brazil international went on the offensive against Arsenal goalkeeper Aaron Ramsdale.

He poked the latter with his finger blaming the goalie for disrespecting the fans by celebrating Arsenal’s victory in front of Spurs’ fans.

While he appeared to assault Ramsdale, the latter made his way to the goal post where he kept his water.

While trying to pick his water, a furious Tottenham fan attempted to break through the barrier before giving him a kick in the back. The assault sparked a mass brawl with players and staff of both teams rushing to the scene

After the incident, Richarlison blanked his compatriot and Arsenal forward Gabriel Martinelli, accusing him of diving more often in the game.

While tempers was still boiling following the assault on Aaron Ramsdale, Gabriel Martinelli offered a handshake to Richarlison who ignored him.

Now, Richarlison has taken to his social media handle to issue an apology asking the Arsenal and national team-mate to ‘hug it out’.

With an edited image of the two players wearing a shirt labeled the ‘t-shirt of the union,’ Richarlison wrote, “T-shirt of union. If you fight, you must wear it. Apologize. Hug it out. Say “I love you.”

However, before this apology, Richarlison had explained in a post-match press conference that he blanked Martinelli because “he dived a lot” in the game.

Richarlison said: “I’d like to apologise to Martinelli, I told him he was diving a lot, so I didn’t shake his hand. Also with Gabriel Magalhaes, I told him they were stopping play all the time, I just said, ‘let’s play’.”

Richarlison and Gabriel Martinelli are Brazil internationals. They were both called up for the 2022 World Cup. However, the win by Arsenal at London Stadium separated the two stars.

Arsenal is now eight points clear of the Premier League table after the win while Tottenham’s top-four battle gets tougher after the loss.