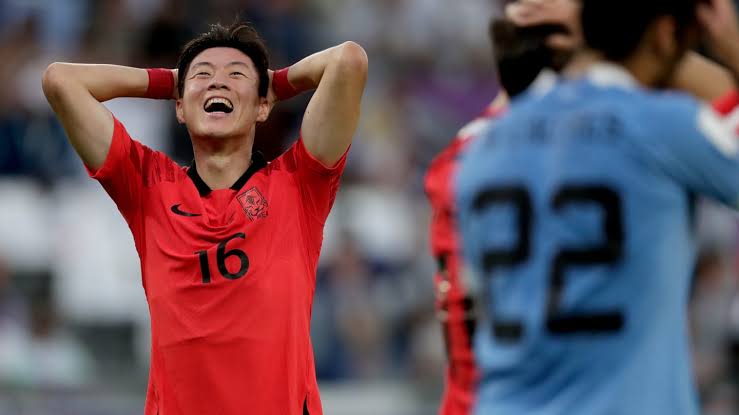 Uruguay vs. South Korea: Uruguay failed to make use of their chances and played a goalless game against South Korea in the World Cup. This is the fourth draw in the 2022 edition of the tournament so far.

The South Korean team pulled up a good fight, with Heung Min Son coming close scoring during the game.

Godin’s ball hit the post, with Edinson Cavani becoming a bigger threat in the match after he was introduced.

In the 29th minute of the game, Uruguay displayed what looked like an effective counterattack when Olivera advanced quickly with the ball and made a quick work of the terrain as he advanced the ball further into South Korean territory. However, the effort ended in futility.

If the counterattack had ended with a pass to Nunez, there could have been something worthwhile from the effort.

Olivera, however, placed too much pressure on the ball, which enabled Seung-Gyu Kim to swerve from his position and made an essential intervention.

Pellistri moves forward down the right and nearly found Suarez, who would have had a chance to shoot in the 43rd minute. However, Min-Jae Kim made a crucial tackle to stop the attempt.

In the 44th minute of the match, Godin raised high and had a powerful header on the ball, which hit the bottom corner of the post. It was a scary moment for South Korea, but they survived.

Afterward, Son received the ball at the edge of the Uruguay penalty box and tried to go past Gimenez in the 50th minute, but the Atletico Madrid defender made a crucial tackle to stop the Tottenham winger.

Rochet was able to punch through Son’s corner after it was flicked on. Jin-Su Kim was brought down in the box after a challenge from Bentancur, and South Korea demanded for a penalty in the 52nd minute.

But the game went on as the referee didn’t have any of it. Additionally, there was nothing from VAR to penalized the Uruguayan.

In the 63rd minute, Uruguay had a chance. Godin played the ball to Darwin Nunez who played a poor pass into the box and it was pushed away by South Korea goalkeeper Seung-Gyu Kim.

Cavani came on for Luis Suarez in the 65th minute, but the former Atletico Madrid striker played as if he did not have a leg and failed to make an impact in the match.

Cavani had the chance to score the first goal in the 69th minute, but it was blocked by South Korea defenders, who were on their toes on through the game.

Heung Min Son charged forward on the right side and crossed into the 18-yard box. Ui-Jo Hwang went after the ball for South Korea, but Uruguay’s goalkeeper Rochet came out to head the ball away in the 71st minute.

In the 75th minute, Heung Min Son collected the ball from midfield and cut back in search of his teammates, but the ball was stopped by Bentancur, who was fast enough to prevent any damage.

In the 78th minute, South Korea was close to scoring. The ball dropped on the left side of Cho’s foot when he hit it, and it went wide.

Uruguay made changes in the 79th minute, with Olivera and Vecino being replaced by Vina and De La Cruz.

On the edge of the penalty area, Nunez found some space and unleashed a left-footed shot in the 81st minute. Edinson Cavani was within millimeters away from making contact with the ball with an attempted header as it was headed to the far corner.

It was a moment for South Korea after Uruguay goalkeeper Rochet’s clearance also hit Cho at the Uruguay goal post in the 86th minute. But nothing came out from the effort.

Manchester United winger Facundo Pellistri was substituted in the 89th minute for Valera after failing to make a positive impact in the game.

In the 90th minute, Federico Valverde unleashed a thunderbolt from 25 yards, and the ball arrows towards the top corner. However, the ball thumps against the upright to deny Uruguay.

Heung Min Son, who was virtually in the game since the start, got an opportunity to make it a goal for South Korea in the 90th minute after a poor pass from Uruguay goalkeeper Rochet.

Cho whipped the ball to the right, where Heung Min Son was patiently waiting to tap in, but it was intercepted by Caceres in the 93rd minute.

Uruguay played a very poor ball from the corner in the 96th minute, and the South Korean goalkeeper Seung-Gyu Kim came out to catch the ball and avert any danger for this national team.

Valera passed the ball to Darwin Nunez in the 97th minute. However, South Korea’s Kim ran in front of Valera, and the referee blew a free kick. Valera was not really happy about the incident.

At the end of over 90 minutes of missed opportunities, Uruguay vs South Korea ended 0-0.

it was the first match in World Cup 2022 with Zero shot on target.

Uruguay has gone 465 minutes without conceding a goal in the World Cup group stages before and during Qatar 2022.