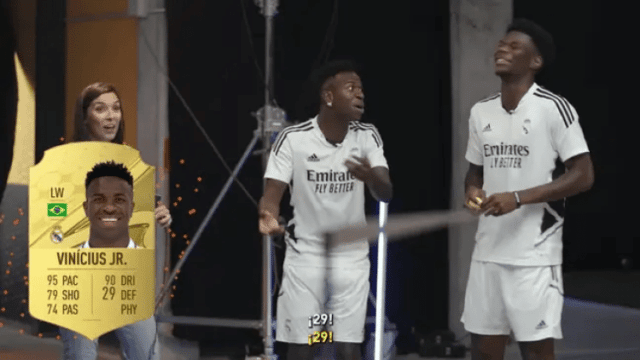 Vinicius Jr. was dissatisfied with his defense stat in FIFA 23 and vented to everyone who would listen in a humorous video.

After a challenging transition to life in Spain, the Real Madrid winger has grown into one of Carlo Ancelotti’s most reliable forwards.

He had the game-winning goal in the Champions League final from the previous season and has five goals in as many games so far this year.

Vinicius’ card rating was 80 in FIFA 22 but has been increased to 86 for this year’s game which is a significant upgrade.

When asked to guess his own defense numbers, Vinicius responded, “I think 60.”

Afterwards, the presenters who could not hide their laughter informed the Brazil international that his defensive ability is rated 29 on FIFA 23.

For improved attacking numbers, most FIFA attackers have low stand tackle and slide tackle stats. Otherwise, we’d all have 99-ranked players on our Ultimate Teams and be roaming the streets.

When the reality of his FIFA 23 hit him, the fast-rising winger, Vinicius yelled: “WHAATT? 29? I’m always down there with the full-back!”

On the other side of the room, Rodrygo and Valverde also displayed disbelief by burying their heads in their hands.

Following Real’s victory over Liverpool in May, the Italian explained: “With Vinicius the only thing in which I have helped him is giving him the confidence that he needed.

“He didn’t play at the start after his holidays and later he played all the time.

“Where he has improved is the effectiveness in front of goal, he hasn’t changed any of the rest.

“Another year with [Karim] Benzema has helped him. I’m happy because he has put the cherry on the cake.”

Vincius José Paixo de Oliveira Junior, also known as Vini Jr. or Vini, is a Brazilian professional football player who currently plays as a winger for La Liga club Real Madrid and the Brazil national team. He was born on July 12, 2000.

He is regarded as one of the top players in the world and is well-known for his shooting, quick pace, and dribbling abilities.

Vincius, a So Gonçalo native, started his professional career at Flamengo at the age of 16, making his senior debut in 2017. A few weeks later, Vincius was transferred to La Liga team Real Madrid, where he signed for a record-breaking £38 million fee for a U-18 player.

After turning 18, the transfer became official, and Vincius made his club debut in 2018–19. Vincius became a key player for Real Madrid by the end of his fourth season, helping the team win the La Liga championship in 2021–22 and scoring the game-winning goal in the 2022 UEFA Champions League Final.

How good is Vinicius Jr?

Vincius was referred to as a “zippy left winger or second striker” by ESPN journalist Dermot Corrigan shortly after his July 2018 transfer to Real Madrid. He is a really talented player.

Although he generally plays on the left side, this versatile player can play everywhere along the front line and has also been utilized in the center and right.

Despite having a slender build, he is known for his movement, energy, and ability to run at defenses, change directions quickly, and beat opponents in one-on-one situations while in possession of the ball. He also possesses explosive acceleration, excellent pace, agility, balance, technique, flair, dribbling skills, and close control at speed.

How fast is Vinicius Jr?

Although there have been a number of quick Brazilian soccer players throughout the nation’s history, some believe Vinicius Jr. to be the all-time fastest. Although the 20-year-old Real Madrid player’s pace has already been put on display quite a bit, this is excellent praise for him.

The speed is apparent, but he is still learning the game, and some people worry if he will ever realize all of his potential. He can not only run at peak speeds, but he can also change directions swiftly, confusing opponents. He may sometimes seem nearly impossible to contain with only one defender.

Related
Kevin De Bruyne Complained of Facing Wales All the time, Says He is Bored