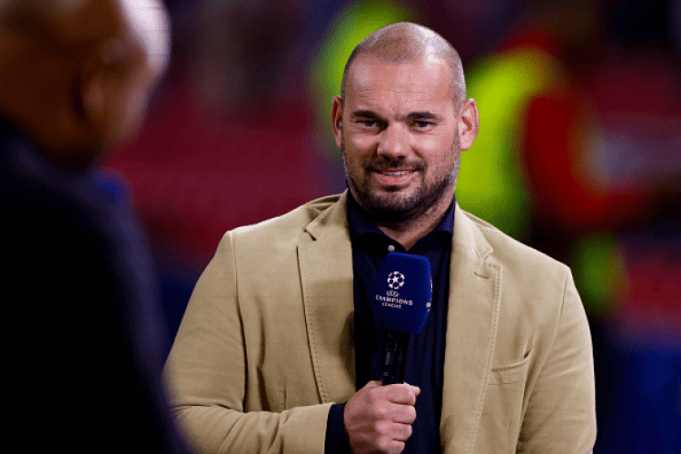 Wesley Sneijder left the Dutch Football Federation’s coaching course because he felt it did not “fit” him and now wants to become a coach on his own terms.

The legendary Dutch footballer will also meet with UEFA president Aleksander Ceferin the following week in Switzerland with the hopes that a different path into management can be mapped out through a different nation’s football organization.

He said on the Dutch television program Veronica Offside, “I want to see if he can arrange something.”

Evidently, Sneijder did not enjoy the Dutch coaching courses; nonetheless, he insists that he is not only aiming to obtain his badges without learning.

Sneijder resigned in 2019 after spending his final season with Al-Gharafa SC in Qatar.

‘I’ve often read that, but it’s not true,’ he said. ‘I want more guidance in managing players.’

‘I asked that at the KNVB. I wanted to do less field training. They couldn’t offer that to me. I still thought: let me join top trainers in the Netherlands, then I can see everything and experience it up close. That didn’t work, so I stopped.’

He continued to RTL7, “I also know that I am not a trainer right now, but I want to be one, however, in the way that I think suits me.”

Sneijder needs to put in more effort to become a manager as his old coach Dick Advocaat believes he has potential.

The three-time Holland manager joined Sneijder on Veronica Offside and expressed his view that the player with the most caps for Holland (134) might succeed as a coach, a role he never took on as a player.

Related
Breaking: Frank Lampard Has Been Sacked as Everton Manager After Board Meeting

“Will I see a coach in Wesley? Yes, completely. We were talking about it before the broadcast. I really think he would be a good manager,” he said.

“In England he could really do great. There you can take your staff and Wesley really knows what his qualities are. The whole world knows him, he speaks his languages, he knows the world and he is a record international for the Oranje.”

“That is quite something. I firmly believe that he could do well in England, also because he really has a strong opinion. It is, in the good sense of the word, also a game with people. He is good at that.”

Additionally, Sneijder asserted that he saw himself as a man-manager.

‘It is also the most fun thing to do: keep a whole group happy. You know you can only field eleven, but you’re dealing with 23, 24 players. That’s the game Dick is referring to,’ he said.

‘Tackling one differently than the other: that’s the game you have to play. My preference at the moment is also more about managing.’

Sneijder is considering options other than the Dutch federation to get his coaching credentials, but he isn’t ruling out finding a middle ground with his own country.

His former teammate Nigel de Jong, who is currently the technical director of the KNVB, has spoken with Sneijder about the possibility of changing the course.

‘I have played with Nigel all my life,’ Sneijder replied.

‘Of course I have spoken to him about it. He will take that with him.’

Wesley Sneijder, a former professional footballer from the Netherlands, was born on June 9, 1984.

Sneijder was regarded as one of the best midfielders in the world during his time because of his exceptional playmaking skills.

He began his professional career as an Ajax player and is a graduate of the Ajax Youth Academy. With Ajax, he won four titles and the Johan Cruyff Trophy in 2004.

He won two Coppa Italias, two Serie As, the UEFA Champions League, and the FIFA Club World Cup while playing with Inter.

Sneijder was voted UEFA’s midfielder of the year in 2010 and was ranked by FIFA as one of the top three midfielders in the world.

He assisted the team in capturing the Turkish Super Cup after a 1-0 victory over rivals Fenerbahçe in his first season with the club after being sold to Galatasaray in 2013 for €7.5 million.

After a fruitless time with Nice, he finished his playing days with Al Gharafa of the Qatar Stars League.

He played regularly for the Dutch national team, making his debut for the team in April 2003 when he was 18 years old.

In addition to being selected man of the match for six out of the eleven games the Oranje played in these two competitions, he received the 2010 Bronze Boot, the 2010 Silver Ball, and was a member of the tournament teams for both the Euro 2008 and the 2010 World Cup.

He holds the record for most Dutch player appearances with 134. In March 2018, he made his international retirement announcement.

Due to his position as the player with the most caps, he was allowed a farewell game against Peru on September 6, 2018.