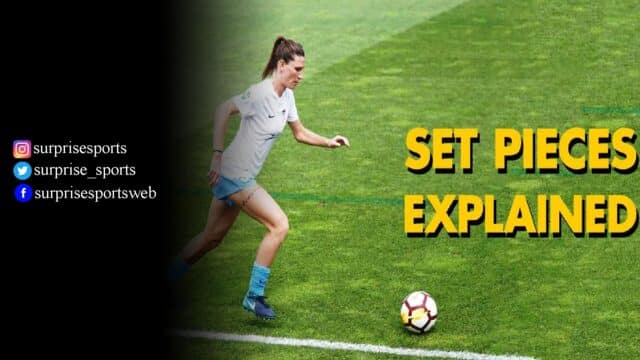 I bet you have already wondered: What are set pieces in soccer? I get why you would ask that. Soccer has many weird names, conventions, laws, and rules that are hard to understand. That’s especially the case when you’re just starting or new to the game. If you have yet to understand soccer set pieces, worry no more; this article explains everything.

More than a simple and straightforward set piece definition, we’ll explain all the different set pieces in soccer, from throw-ins, corner kicks, and goal kicks to free kicks and penalty kicks.

Set Piece Definition: What Are Set Pieces in Soccer?

Without further ado, let me give you a clear set-piece definition.

Set pieces in soccer happen following a stoppage of play due to a foul or the ball going out of bounds.

They range from throw-ins, corner kicks, and goal kicks to penalties and free kicks.

Each of these events usually occurs after the referee’s whistle is blown because of a foul or the ball going out of bounds.

A set piece takes place in what can be called a “dead ball” situation, as the game has been paused until one of the aforementioned events occurs.

What Are Throw-ins In Soccer?

The throw-in is the only set piece that doesn’t involve kicking the ball.

A throw-in happens when the ball crosses the touchline (or sideline), the longest line on the field (one on each side).

The team that doesn’t touch the ball last before it goes out will get the throw-in.

For a throw-in, the player has to keep both feet on the ground and bring the ball from his / her back fully over the head with both hands before throwing it back into play.

Related
Aggregate Score in Soccer: Definition, How It Works & When It's Used

This is the only time field players (i.e., all footballers other than the goalie) can touch the ball with their hands.

What Are Corner Kicks?

When the ball crosses the goal line (located on both ends of the field), it’s either a corner or goal kick.

A corner kick is exactly how it sounds: the ball gets placed into the corner of the field on the side it exited if last touched by the defending team.

There is a marked-off space in the corner where the ball must be placed.

From there, the player kicking the ball will try and find a teammate somewhere in the penalty area (the 18-yard / meter box, also called the goal box), if not the goal area (6-yard / meter box), to latch onto the ball, most often being a header.

Sometimes, a team uses set plays for attacking players to get open in front of the goal so they can knock the ball in.

If the attacking team is the last to touch the ball, it becomes a goal kick.

Goal Kicks in Soccer: What Are They?

The goal kick is the simplest of kicks as the kicker’s purpose is usually to kick it as far away from the goal as possible into the vicinity of teammates to resume play and start an attack.

The ball gets placed on either the left or right side of the top line of the goal area, with the side being the kicker’s choice.

In youth games, it’s sometimes easier to pass it to a nearby defender, as kids don’t have the same power to kick it down the field.

The easiest method would be to find a teammate on the same field side to pass to so the kicker doesn’t pass the ball across the face of the goal.

The kick taker is often the goalkeeper, but sometimes that can be delegated to a defender with a stronger leg.

Related
Premier League Manager Of The Month For September 2022: See Nominees And How To Vote

What Are Soccer Penalty Kicks?

Penalty kicks are the easiest type to understand, although they can also be considered the most difficult to understand for why one is called.

One is called when an attacking player gets fouled inside the opposing team’s 18-yard box (penalty area).

Calling a penalty is up to the referee’s digression, and most often, simple fouls that are called outside of the box will not be called because of the value and importance of a penalty kick.

When a player makes a poor foul inside the penalty area or when a defender is the last one left and fouls an attacker on a breakaway, that will more often than not result in a penalty.

A handball can also be called, but again, that’s up to the referee to decide on whether it’s inadvertent or not (inadvertent handballs should not be called).

As for the penalty kick, the ball is placed on the penalty spot, 12 yards/meters out from the center of the goal.

This will leave the penalty taker and the goalie in a one-on-one situation where no dribbling is allowed.

The kicker has to approach the ball in one fluid motion, while the goalie cannot leave the goal line before it is kicked.

The rest of the players in the game have to stay outside the penalty area but can charge in once the ball is kicked.

What Are Free Kicks?

For free kicks, there is a wide variance of situations.

There are two types of free kicks indirect kicks occurring from offsides and less serious fouls like unsporting behavior.

Direct kicks are more common as they are called from a contact foul or handball.

Free kicks have a wide range of outcomes because they can be called anywhere on the field (outside the penalty area).

Related
Canada Will Not Receive New World Cup Kits For 2022: Here's Why...

Kicks on the defensive end for a team are similar to goal kicks as the purpose is to try and advance the ball up the field with help from teammates because simply booting the ball into a bunch of players could easily result in loss of possession.

When a free kick occurs in the attacking end, more often than not, you want to try and get an open look on goal.

The closer the kick is to the goal, the easier it is to score.

Like corner kicks, it may help run a set play for free kicks on the attacking end to get a better look at the net.

That can lead to a header in the box or a player opening on the outside of a mess of players in the middle.

Set pieces can range from some things in soccer across the pitch, but the big takeaway is that they don’t occur during open play.

One team has rights to the ball, whether it’s a kick or throw-in, and the other team has to give a reasonable distance, usually 10 yards/meters from a kick or a few yards, for a throw-in so as not to block the player’s attempt at a set piece.

Man City, Haaland, and the Myth of the Transformative Signing