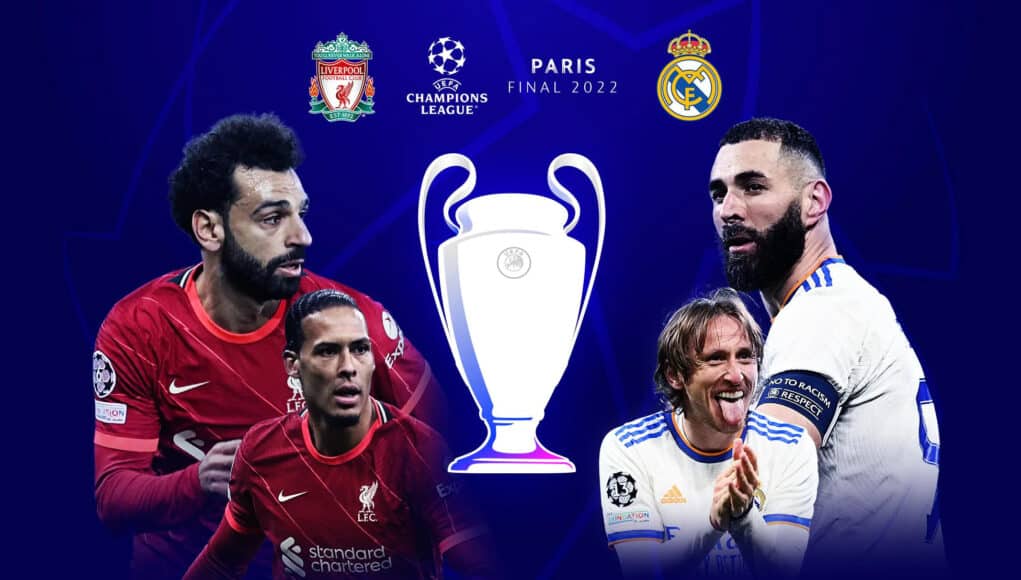 We are down to the final showdown of the UEFA Champions League season 2021-2022 as Real Madrid and Liverpool are set to lock horns in the Final at Stade de France. Here we have everything about Real Madrid vs Liverpool, date, time, venue, team news, probable lineup, stats, and how to watch the UCL Final.

When and Where is Real Madrid vs. Liverpool?

The UEFA Champions League Final 2022 between Real Madrid and Liverpool will be held at Stade de France in front of a huge crowd of 80,698.

The two top guns in European football this season, Real Madrid and Liverpool, have made it all the way to the UCL Final. The La Liga Champions Real Madrid will square off Liverpool to grab their 14th Champions League glory. Two English cup winners this season, Liverpool will seek revenge for their UCL Final 2018 defeat against Real Madrid.

The word ‘Miracle’ has been the headlines of Real Madrid this season in the UCL. They pulled an incredible comeback in the 2nd leg of the Round of 16 against PSG after losing the first leg.

They beat Chelsea in the quarter-finals by 5-4 goals on aggregate into extra time, after seeing them a goal behind with 15 minutes left on the clock in the 2nd leg.

Real Madrid pulled the ultimate comeback in the semi-finals against Man City. They scored two goals at 90′ and 90+1′ respectively in the 2nd leg to push the match into extra time. They won the tie by 6-5 goals on aggregate from there to reach the Final.

The English giants Liverpool have played the highest possible number of games this season; they have reached 3 Cup finals and chased Man City till the final day of the EPL. The Reds have already won two cup finals this season, the FA Cup and the EFL Carabao Cup.

Juergen Klopp’s men will take on Real Madrid on Saturday to get their hands on their 7th UCL title and try to be the second most successful team jointly with AC Milan.

Liverpool overcame the group of death this season in the UCL containing Atletico Madrid, AC Milan, and FC Porto. Then they beat Inter in the round of 16, Benfica in the quarter-finals, and a spirited Villarreal side in the semi-finals to reach the Final.

Liverpool are coming into the final with a massive 18-match unbeaten run in all competitions. Real Madrid, meanwhile, have lost four of their last 15 matches in all competitions. However, the recent form will count for little when the whistle blows at Stade de France on Saturday night.

Saturday’s Final between Liverpool and Real Madrid at Stade de France will be the rematch of the UCL Final 2017-2018 season when Real Madrid beat Liverpool by 3-1 goals to lift the trophy.

Liverpool boss Juergen Klopp has received crucial injury boosts ahead of the UCL final. Fabinho and Thiago Alcantara have reportedly recovered from their injuries and trained with the team. They are set to start the final match against Real Madrid. Fabinho had taken a knock in the EPL against Aston Villa on May 10. The attacking midfielder Thiago suffered an injury in the final matchday of the EPL against Wolves.

Real Madrid don Carlo Ancelotti has received injury boosts too. David Alaba, who missed the last 6 matches for Real Madrid, will be available for selection against Liverpool. Otherwise, Real Madrid will play with a fully-fit squad.

Vinicus Junior could be a great threat for Liverpool up the left flank. He has been a dangerous runner into the box. This Brazilian ace winger is the joint top assist provider in the UCL this season with 6 assists.

The Brazilian young gun Rodrygo has been the hero of the comeback for Real Madrid in both quarter-finals and semi-finals. He scored the 4-4 equaliser on aggregate in the 80th minute against Chelsea and 2 goals in the 90th and 91st minute to send the match into extra time against Man City. Everyone’s eyes will be on him for another miracle.

Real Madrid claimed three UCL trophies in a row by beating Liverpool in the UCL Final 2018 in Kyiv. That was their 4th title in 5 seasons.

Real Madrid and Liverpool went head-to-head 8 times in the European competitions. Liverpool won the first 3 meetings between 1981 to 2009. The Reds have not defeated Real Madrid since 2009. Real Madrid won 4 and drew 1 of their last 5 meetings with Liverpool.

Mahomed Salah has scored 33 goals and assisted 11 for Liverpool in the Champions League since the 2017-2018 season, only behind Robert Lewandowski (55) and Kylian Mbappe (47).

Benzema is the 4th all time top scorer in the history of the UCL with 84 goals.

How to Watch Real Madrid vs. Liverpool?

BT Sport 1 and BT Sport Ultimate will telecast live the UCL Final 2022 between Liverpool and Real Madrid in the UK. The live coverage will begin at 6:00 pm BST ahead of an 8:00 pm BST kickoff.

If you are on the go, you can catch the live action of the Real Madrid vs Liverpool match via BT Sport app and BT Sport website, only available for the BT Sport subscribers.

CBS and TUDN will broadcast the UCL Final between Real Madrid and Liverpool in the United States. If you prefer to watch the live stream, you can subscribe to Paramount Plus and fuboTV to watch Real Madrid vs Liverpool.

Cristiano Ronaldo has reportedly asked for a transfer to Manchester United