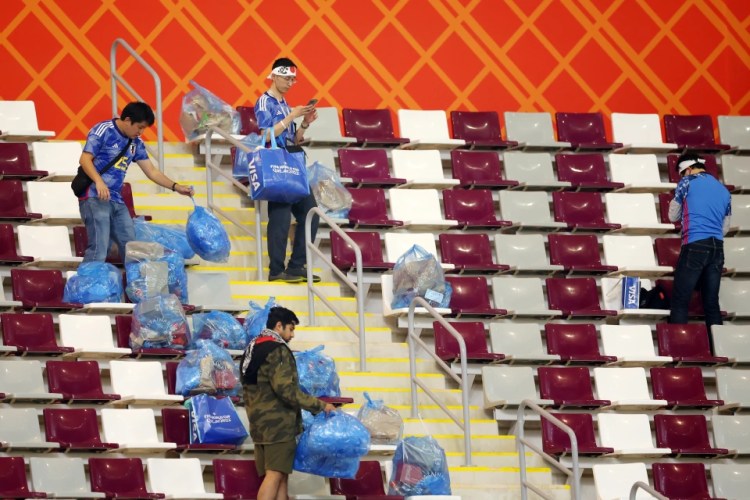 The Japanese football fans have demonstrated themselves to be wonderful guests following their distinguished selfless service at the 2022 Qatar World Cup.

After Japan thrashed Germany 2-1 in a late comeback, on November 23, many Japanese fans took some time after the match ended to tidy up the Khalifa International Stadium.

Ilkay Gundogan gave Germany the lead in the 31st minute of the first half after Shuichi Gonda from Japan conceded a penalty for tripping David Raum.

In the wee time to the end of halftime, Kai Havertz scored but it was ruled out as offside.

However, the Japanese bounced back with a stunning brace.

Ritsu Doan gave Japan the equalizer in the 75th minute, after reaching for a loose ball and sending it straight into the net with his left foot.

But after the celebrations had ended, many Japanese fans were spotted in the stands picking up garbage.

Those kind guests in their lovely Japan Jersey were spotted going up and down the stands with transparent blue bin bags collecting waste.

Japanese fans have a reputation for cleaning up the waste from other football fans in stadiums during major tournaments.

Win, lose, or draw they command the respect of always taking bin bags to games and tidying up the stands.

An example of their kind gesture was the match between Ecuador and Qatar on Sunday, 20th of November.

Some Japanese fans were spotted picking up thrashes, including flags that were left on the ground.

Also, in the 2018 World Cup, they helped to pick up trash in the match between Belgium and Russia, which Russia lost 3-2.

A Mexican Fan Tried to Sneak in Alcohol Despite Qatar’s Warning.

However, while Japanese fans are being praised for their respectable actions at the Qatar World Cup, some fans decided to do otherwise.

One of the World Cup fans appeared to have sneaked in alcohol into a Qatar stadium before a match.

A video posted on Reddit revealed a Mexican fan being searched thoroughly by a member of the security team at the pitch entrance.

The culprit’s style of sneaking liquor into the stadium wouldn’t have been detected if not for the exceptional wit of the security officer.

The flask containing the alcohol is cunningly disguised as a pair of binoculars.

However, the security guard refused to be deceived as he puts up the innocent-looking binoculars to his eyes.

The content inside the binoculars was unraveled when the security guard unscrews one of the lenses and then makes a gesture of lifting the binoculars to his lips as if he was drinking from it.

Meanwhile, a container that looks like a binocular, sold for £16.95 was advertised on the retail site, Amazon, which was described as being “the perfect festival accessory” and is capable of holding 16oz of liquid.

Investigation to verify the content of the binoculars is still ongoing and if it eventually turns out to be liquor, the fan is likely to be punished accordingly following FIFA’s Warning and Qatar’s rules and regulations which were released before the tournament started.