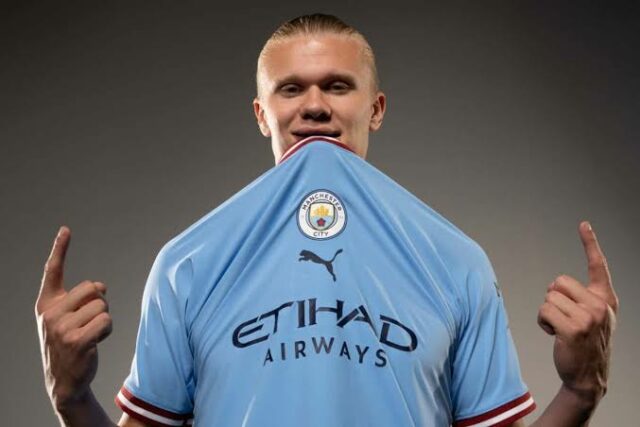 Erling Haaland made his Manchester City debut against Bayern Munich on 24th July 2022, in a preseason-friendly. He scored the only goal that saw Pep Guardiola’s men cruise past the Bundesliga giants.

Interestingly, his first appearance for the Citizens in a competitive game ended in a bad taste. Manchester City lost 3-1 to Liverpool in the Community Shield, with Julian Alvarez coming in to secure a consolation goal for the team. Haaland missed a glaring chance to score, attracting backlash from football fans.

The 22-year-old highly-rated Norwegian ace was tipped to have a difficult start in the Premier League after the Community Shield defeat. Former Manchester City striker and Argentine international Sergio Kun Aguero said Haaland would need time to adapt to the Premier League and may be unable to replicate his Bundesliga form quickly.

In nine matches so far for City, Haaland has proved critics wrong. He has scored 14 goals already, with 11 of those goals coming from his 7 Premier League appearances, 3 goals from his 2 Champions League matches.

Erling Haaland opened his Premier League debut in a fine form against West Ham on 7th July 2022. He scored the two goals that saw Manchester City grab all three points against the David Moyes-led team in London.

At Saint James Park on August 21, 2022, Manchester City settled for a six-goal thriller with Newcastle, ending the game with a 3-3 draw. Haaland scored the second goal for Manchester City, building his goal tally to three in three Premier League matches.

Manchester City’s next two Premier League matches was when the £54m signing from Borussia Dortmund announced his readiness for the Premier League challenge. Haaland scored a hat-trick in Manchester City’s 4-2 win over Crystal at the Etihad on 27th August 2022. On 31st August 2022, he scored another hat-trick against Nottingham Forest as Pep Guardiola cruised to a big 6-0 victory.

Related
Canada Will Not Receive New World Cup Kits For 2022: Here's Why...

In Manchester City’s 1-1 draw against Aston Villa on September 3, 2022, Haaland scored the only goal in the match to take his tally to 10 goals. He scored again in City’s 3-0 victory over Wolves on September 17, 2022.

Haaland bagged a brace in Manchester City’s 4-0 win over Sevilla in his Champions League debut for the club. He also scored a mouthwatering acrobatic winner against his former club Borussia to secure a 2-1 win for City. He is currently 5 goals clear of the 2022/23 Premier League top-scorers chat with 11 goals. Aleksandar Mitrovic of Fulham and Harry Kane of Tottenham follow with 6 goals each.

Spotlights on Erling Haaland’s all goal for Manchester City