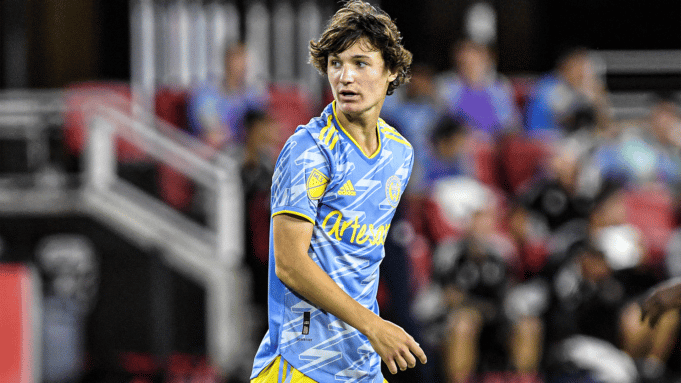 Paxten Aaronson is the younger brother of Leeds United star Brenden Aaronson, and there is a lot of excitement about the youngster’s potential. Indeed, some specialists say he could be even better than his sibling over the course of his career.

Aaronson recently earned a switch to Eintracht Frankfurt in the German Bundesliga, and the club will provide him with some crucial years in his development. Over the next couple of seasons, it may become more obvious as to whether the 19-year-old can go on to be a major name in the game.

Aaronson Was Poached Early in His Career

Aaronson spent his youth career in the Philadelphia Union for five years between 2015 and 2020, but only played three seasons playing professionally for the MLS outfit. Between 2020 and 2022, he racked up 24 appearances and scored six goals for the second team, and in the 2021-22 season he played 37 times for the main side. He scored four goals and displayed qualities that caught the attention of international scouts.

Perhaps it was his blistering performances that helped Aaronson seal a deal to the German top flight. Or maybe the European club had already seen the success of Brenden and decided to move early on the brother. It’s likely that the decision to sign Aaronson was a combination of these two factors, and it’s fair to say that Frankfurt took a punt on an unfinished product when they signed him for $4 million plus add-ons in November 2022.

Players Like Aaronson Helping More Americans Get into Soccer

There are high hopes for Aaronson’s future because he could be a major boost to the national team in the World Cup in 2026. The USSF will also be banking on the fact that the rise of young stars like the Medford-born player will help grow interest in the sport ahead of the tournament. This will be crucial as the USA will be joint hosts alongside Mexico and Canada.

There are other ways that more American fans are developing an interest in soccer, though. Aside from marketing and branding to get USMNT players in the public eye, the growing online betting industry is helping massively. Now, Americans can stake on soccer matches at a variety of sites. They can search for the best US sportsbook apps and choose one based on the offers available. These include risk-free bets at Caesars Sportsbook and BetMGM and deposit match bonuses for new users at DraftKings.

Brenden Aaronson moved from the MLS to Red Bull Salzburg in 2021, and only spent one season playing in the Austrian Bundesliga before he caught the attention of major clubs. He signed for Leeds United in the summer of 2022 for a sizeable transfer fee in the region of $30 million and has become a key player for Jesse Marsch at Elland Road.

There’s a good chance that Brenden could help influence a Premier League move for Paxten if the latter gets off to a good start in Germany. Certainly, there will be many Leeds fans hoping the two brothers can link up and form a devastating attack in West Yorkshire.

It’s hard to say whether Paxten’s career trajectory will follow the same direction as his brother’s. Right now, the signs look promising, and he is one to keep an eye on in the future. Indeed, the Frankfurt man could even end up becoming a more important player for the USMNT than his older sibling.