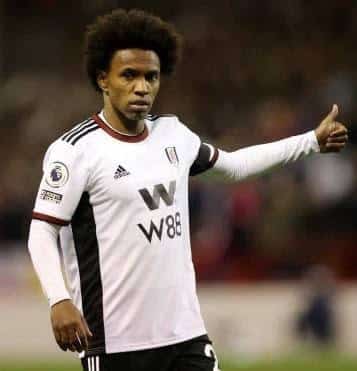 Fulham’s new signing and former Chelsea midfielder, Willian, has pulled stunning but significant stats against Chelsea’s highly-rated players, although playing fewer minutes than them since his return to the Premier League. Mount, Ziyech, Pulisic, and Havertz have played a total of 20 matches between them but are yet to record any assist for Chelsea.

It is a ridiculous statistic especially the fact that Willian has outnumbered all of Chelsea’s top and highly-rated players with assists, although playing a far fewer number of games than them.

Apart from Hakim Ziyech, who has played just two matches for the Blues, Pulisic, Havertz, and Mount have played six games each for Chelsea and are yet to record an assist this season. This contradicts Willian’s two appearances for Fulham, with an assist.

The stats point to the enormous task of rebuilding awaiting new manager Graham Potter, who has taken over the managerial role at Chelsea after the sack of Thomas Tuchel. Nevertheless, from his days at Chelsea, Willian has always been a top midfielder to rely on and has been prolific throughout his spell in Europe and his home country Brazil.

William Borges da Silva was born on August 9, 1988, in Ribeirao Pires, Brazil. He plays as an attacking midfielder and winger for English Premier League side Fulham after joining the club in the 2022 summer transfer window.

Willian’s first stop in English Premier League was at Chelsea. He joined the Blues in 2013 and spent seven years with the club. While at Chelsea, Willian made 234 appearances and scored 39 goals.

In 2020, Willian joined Arsenal and played for just one year for the Gunners, making 25 appearances and scoring just one goal.

He returned to his former club, Corinthians, where he started his football career in 2021 and made 35 appearances, scoring just one goal. After a mutual agreement with Corinthians, Willian terminated his contract alleging virtual threats to his life.

He returned to Fulham in the Premier League, signing a one-year contract. William had only two matches for the club since the beginning of the 2022/23 Premier League season.

William had made 20 appearances for the Brazil U-20 national team. He has been capped 70 times and has scored 19 goals for Brazil’s senior national team since making his debut in 2011.

He is an agile, fast, and technically gifted player known for his quick and explosive style of play, which helps him to dribble off opponents with speed while keeping close control of the ball. William uses feints and tricks like elastico to throw defenders into confusion. He is primarily a winger with great stamina and vision.

10 Best Two-footed Footballers in the World