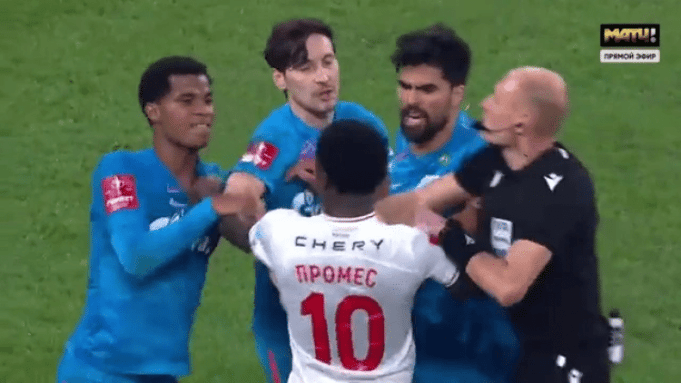 Zenit vs Sparta football match erupted into a huge 40-man brawl with the referee caught up in the fighting.

Sunday’s Russian Cup match between Spartak Moscow and giants Zenit St. Petersburg was expected to be a feisty one.

And they did not let us down as the game’s dying seconds deteriorated into complete anarchy and SIX red cards were issued.

Spartak prepared to take a free kick from deep inside their own half as the game remained scoreless and was headed for a penalty shootout.

But just as it was being taken, their attacker Quincy Promes and the opponent’s defender Wilmar Barrios jostled shoulders and verbally sparred, setting the stage for a massive brawl.

All of the players’ teammates and nearly every member of the backroom staff from each side rushed in all at once.

As Zenit’s Rodrigao Prado charged in to start kicking the opposition directly in front of him, the referee immediately waded in to try and calm things down. However, even he found himself being pushed, pulled, and shoved around.

Surprisingly, he even avoided receiving a red card, while many others were not so fortunate.

During the melee, the official, who fortunately didn’t appear to be hurt, chased the guilty parties and gave them red cards left, right, and center.

Amazingly, none of the 22 players who were actually playing received their marching orders despite the fact that at least 50 people were involved in the fight.

Three reds were issued to each team and were given to spectators who weren’t on the field when the explosion occurred.

Malcom, a former Barcelona star, was one of them.

While Aleksandr Sobolev, Shamar Nicholson, and Aleksandr Selikhov were given an early bath by the official, his Zenit teammates Wlmar Barrios and Rodrigo joined him.

After a protracted wait, order was finally reinstated as the game ended in a draw.

Players from both clubs were seen punching each other in the video, and the referee was forced to attempt to cool things down among the more enraged parties.

Aleksandr Sobolev of Spartak was particularly involved in the violence despite sitting on the bench when the fighting started.

As soon as the Russian forward entered the field, he immediately got to work attacking opponents.

Three Spartak players were shown the red card, all of whom were substitutes at the time of the altercation. He was one of them.

Barrios, who started the 40-man brawl and was given a straight red card for it, will undoubtedly feel unfairly treated given that Promes stayed on the field. Zenit also had three players sent to the dressing room.

The brutal fight undoubtedly briefly diverted attention from the Qatar World Cup, and Spartak attempted to clarify the issue with a match report that read:

“The fight still happened. It all started with the junction of Promes with Barrios, as well as the exchange of blows by the same Rodrigao and Nicholson.”

“And this time much more desperate. Everyone fought, including substitutes and staff. As a result, after a long pause, Moskalev removed this ‘couple’, as well as Sobolev, Malcolm, Barrios and Selikhov, who took a particularly active part in the events.”

But Zenit was the one left jubilant after winning the shootout 4-2 and moving on.