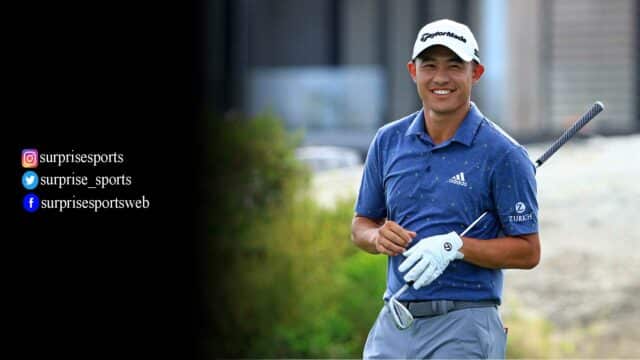 Collin Morikawa is an American professional golfer. He is one of the most successful golfers among young PGA Tour competitors. For his amazing achievements at a young age, he is often compared to the golf legend Tiger Woods by his fans and peers.

Collin Morikawa has a net worth of $7 million in 2022. Ranked 7th in OWGR, he is within The Top-100 of the PGA Tour career money list. From 5 PGA Tour victories, he already amassed over $7.6 million as prize money.

Due to his successful career, Morikawa has had some heavy brand sponsors backing him since his amateur days. Back in 2019, Adidas signed a multi-year contract with him. When Playing, he often wears Adidas apparel for advertisements. Morikawa himself expressed his excitement as a fan after signing the deal. The golfer is also affiliated with other brands such as Omega Watch, TaylorMade, and Zurich Insurance.

In 2021, US Bank got the branding rights on Morikawa’s golf bag. They are currently serving as his primary bank sponsor. The player has confirmed owning several luxury class car collections. He served as a brand ambassador of Cadillac previously for an online event.

Collin Morikawa is ranked 10th in the Top-10 Highest-Paid golfers’ list. The American golfer has earned around $11.1 million dollars as prize money in his career. Adding the endorsement income of $9 million, his total earnings will be $20.1 million in 2022.

Morikawa made his debut in the 2019 RBC Canadian Open. Placing a tied 14th place, he won $125,400 as prize money from his debut event. His first PGA Tour title rewarded him $630,000. But he earned his highest prize money of $2 million from his very first major Tour win, the 2021 Open Championship.

The sportsman has already achieved his first international event victory back in 2021. Winning the DP World Tour Championship in Dubai, he became the first American to win the season-long Race. He bagged a whopping $2.7 million from the event.

Appearing in the major PGA Championship 3 times, Morikawa has earned around $2.2 million. In the 2021-22 season, the player earned about $3.6 million from tournaments only. Most recently, he positioned T40 at the Charles Schwab Challenge and bagged $30,660.

Morikawa is currently participating in the US Open Event held at The Country Club in Massachusetts. The event has listed total prize money of $17.5 million. If he can keep his 1st place throughout the event, he will receive around $3.15 million as prize money.

Considering his young age and success within such a short period, fans are eagerly expecting Collin Morikawa to make enormous accomplishments in the coming days.