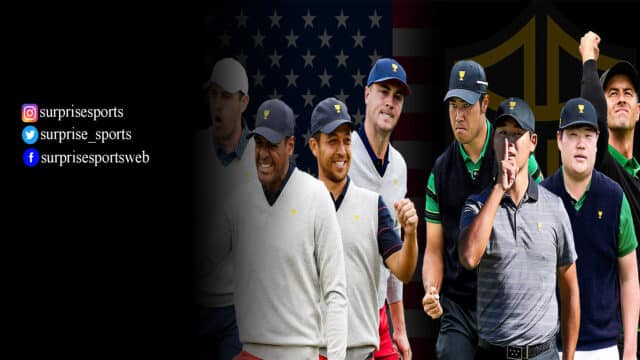 The Presidents Cup returns this week at Quail Hollow Club, Charlotte, North Carolina, going underway on Thursday, 22 Sept. at 1:05 pm ET. 24 of the PGA’s best golfers – 12 in the U.S. and 12 in the International Team (except Europe) – are taking part in this year’s competition. Here you can know the Presidents Cup 2022 teams and captains. Find out who’s playing right below.

The fans hope for another nail-biting finish like the last Presidents Cup in 2019. Team US, captained by Tiger Woods, entered the final day of singles matches trailing by 8-10. They won six singles and tied four on the final day to take the title by 16-14 points.

Who’s Playing in the Presidents Cup 2022?

The Presidents Cup is a team competition between two teams – Team U.S. and Team International. Each team consists of 12 golfers.

It will be a 30-match competition, with a point for winning each match and a half-point point for a draw.  The team that finishes with more points will win the Presidents Cup. There will be 9 foursomes matches, 9 four-balls matches, and 12 singles.

Davis Love III is the U.S. Captain. He has taken 6 players of his choice on the team. The other 6 U.S. players are who earned the most FedEx Cup points from 2019 to this year’s BMW Championship.

World No. 1 Scottie Scheffler headlines the U.S. Team. Patrick Cantlay and Xander Schauffele are also among the top-ranked players. The U.S. will miss Will Zalatoris due to a back injury.

In the International team, 8 players were given automatic berths who earned the most points from the 2021 British Open to this year’s BMW Championship. But world no. 2 Cameron Smith and Joaquin Niemann are banned due to joining LIV Golf.

As a result, 6 players will get automatic berths based on points. Captain Trevor Immelman has chosen the other 6 players for the International team.

Here are the tee times and pairings for the First Round on Thursday, 22 Sept.