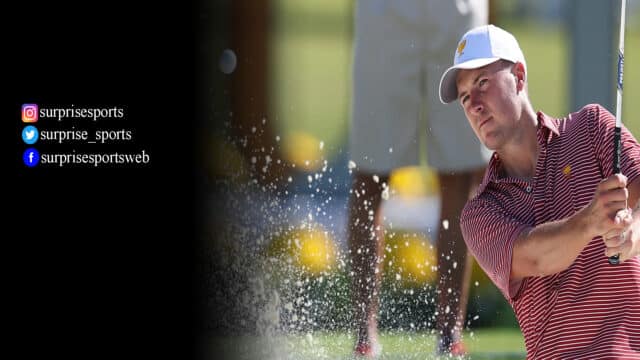 After a three-year break due to the COVID-19 pandemic, the Presidents Cup returns this week at Quail Hollow Club, Charlotte, North Carolina. The U.S. and International (except Europe) teams, each having 12 players, will compete in the match-play golf competition from 22-25 Sept. Here we have the Presidents Cup 2022, dates, format, TV coverage schedule, tee times, and pairings.

The fans hope for another nail-biting finish like last year’s Presidents Cup. Team US, captained by Tiger Woods, entered the final day of singles matches trailing by 8-10. They won six singles and tied four on the final day to take the title by 16-14 points.

However, team International will miss some big names. World no. 2 Cameron Smith will miss out due to his joining the LIV Golf. Joaquin Niemann is another big miss.

On the other hand, team U.S. will miss Will Zalatoris due to a back injury.

Alright, let’s ask a fun question. Who eats the most on the Int team?

It will be a four-day competition starting on Thursday, 22 September, at Quail Hollow Club, Charlotte, North Carolina. The competition will end with the Final Round on Sunday, 28 Sept. The play will go underway on Thursday at 1:00 pm ET.

It will be a 30-match team competition – 9 four-balls, 9 foursomes, and 12 singles matches.

The teams will get one point for winning each match, earning a half-point for tied matches. The team winning more points will be the champions.

Two teams of two golfers each, with alternating shots. The players will alternate tee shots. The team that completes the hole in the fewest shots will win the hole.

Two teams of two golfers each, with each golfer playing his shot. The team with the golfer who has the lowest score on a hole wins the hole.

NBC will cover the vast majority of the Third Round on Saturday. They will exclusively broadcast the Final Round on Sunday.

The cable-cutters can catch the Presidents Cup live stream on NBCSports.com, the NBC Sports app, and Peacock.

The U.S. Captain Davis Love III will deploy Patrick Cantlay and Xander Schauffele to tee off the first foursome match on Thursday. The International Captain Trevor Immelman will put Adam Scott and Hideki Matsuyama forward for the first match. The first match will go underway at 1:05 pm ET.

Tee Times for the First Round