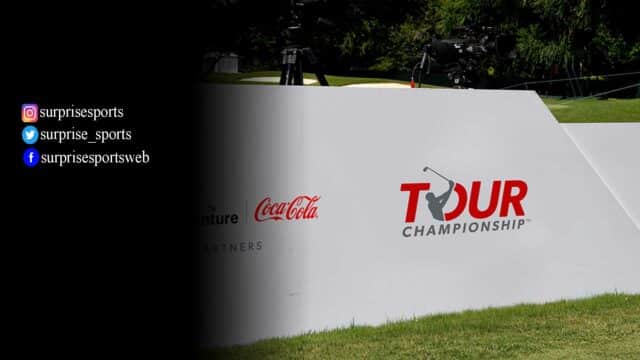 The PGA Tour’s FedEx Cup’s final playoff, the Tour Championship 2022, is taking place at East Lake Golf Club in Atlanta from 25-28 August. Based on the season-long points and the first two playoffs, the top 30 players compete for the FedEx Cup and a staggering prize pool. In this article, we will take a look at the Tour Championship 2022 purse and prize money payouts.

Due to his superior position on the final standings, world no. 1 Scottie Scheffler started the Tour Championship with a two-stroke lead (-10) over second place Patrick Cantlay (-8).

The third pace Will Zalatoris withdrew due to a back injury. The fourth place Xander Schauffele started with 6-under, 4 strokes off the top.

After half through the Third Round on Saturday, the play was suspended due to bad weather. The action will resume on Sunday before the beginning of the Final Round.

Scottie Scheffler maintained his lead at the top with a -19 after playing 12 holes on Saturday. Xander Schauffele was a stroke behind with -18 after 12 holes. The BMW Championship winner of last week and last year’s FedEx cup winner Patrick Cantlay is at 14-under.

The PGA Tour’s FedEx Cup will end with the Tour Championship 2022 and a jaw-dropping prize pool.

The total purse is $75m for the season’s best 150 players between deferral payments and bonuses.

This mammoth prize money pool is slightly less than the combined purse of the Players Championship, Masters, PGA Championship, U.S. Open, and The Open.

On top of that, the winner’s share is an incredible $18m, which is more than the other events’ total prize pool, barring the Players Championship. For winning the FedEx Cup last year, Patrick Cantlay pocketed $15m.

Here are the prize money payouts for the 30-player field of the Tour Championship 2022.

Will Zalatoris won the FedEx Cup first playoff St. Jude Championship. He withdrew from the Tour Championship due to a back injury. Zalatoris will pocket $500,000, the 30th place payouts.