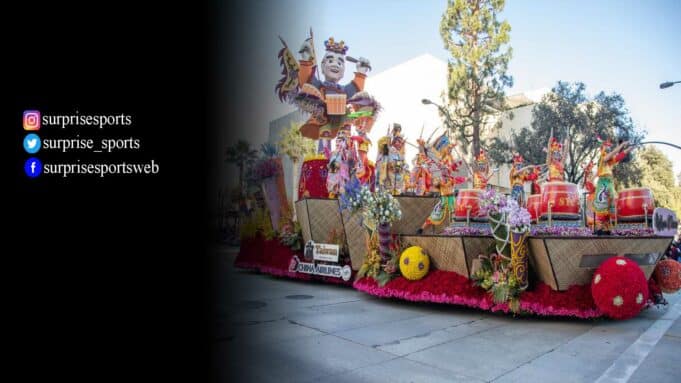 The 2023 Rose Bowl Parade will air beginning at 11 a.m. ET on Monday, January 02. The program will last 90 minutes with commercial breaks.

How to Watch the 2023 Rose Parade Online in the US

In the U.S., the 2023 Rose Parade airs Monday, January 2, at 11 a.m. ET / 8 a.m. PT. It’s airing on several channels, including local ABC affiliate KTLA. Most people can watch the broadcast on NBC or stream it on Peacock.

NBC is a local broadcast network that can be accessed with one of the best TV antennas or through a cable TV package.

If you’ve already cut the cord and don’t have cable, you can watch NBC on a live TV service, like Sling TV, FuboTV, YouTube TV, Hulu With Live TV, and DirecTV Stream.

Of these options, we recommend Sling and FuboTV, two of the best streaming services on the market.

How to Watch Rose Parade in the UK

Unfortunately, the 2023 Rose Parade does not seem to air on any U.K. channels. For Americans abroad who want to watch it using the services they already pay for, check out ExpressVPN.

How to Watch Rose Parade in Canada

Canadians are also out of luck. The 2023 Rose Parade doesn’t appear to be airing live on any channels in Canada, though the Rose Bowl itself will be broadcast on TSN 2. Anyone traveling in Canada who wants to access their subscription services will need ExpressVPN.

Is It Worth Watching the 2023 Rose Bowl Parade?

Sure! There are worse ways to usher in 2023. The show is great to have on the television when you’re celebrating with your friends, cozying up with your pets, or just trying to ignore live human interaction. Plus, it’s a middle-class tradition! People have been ringing in the new year with this parade for decades now.

How Much Does It Cost?

If you view it on NBC or ABC, nothing.

Peacock may cost you money depending on which package you choose. There is no fee to sign up for the most basic level of Peacock, and no credit card is required upon signing up. All that’s needed is an email address for users to access 10,000-plus hours of content for free. The free tier is very limiting in terms of content. If you would like to access more programs from Peacock, there are various paid tiers to explore.

Peacock Premium is the first paid tier from the streaming service, with access to over 80,000-plus hours of entertainment for a monthly price of $5, or $50 per year. This tier contains ads but allows users to access new films and live events. If this tier is too restricting, users can upgrade to Peacock Premium Plus, which costs $10 per month or $100 per year. Premium Plus includes everything from Premium but contains no ads and allows users to download and watch programs offline.