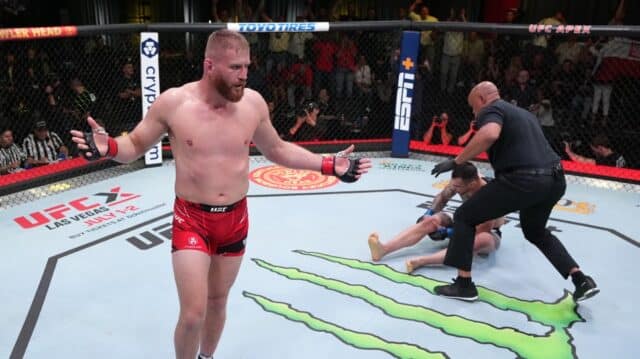 Former UFC welterweight champion Jan Blachowicz got the better of Aleksandar Rakic in the final of a UFC Fight Night gala presented in Las Vegas by technical knockout in the 3rd round, after an injury to Rakic.

Rakic’s knee completely abandoned him after a combination of Blachowicz that caused him to back off, and the referee immediately stopped the fight.

“He had an injury… it happens. I hope the UFC gives me a chance for the title,” Blachowicz said.

Both men had an excellent fight in the first two rounds, with good attacks.

Blachowicz threw a lot of blows to Rakic’s legs in the first assault, while Rakic brought his opponent to the ground in the 2nd round.

This duel was originally scheduled in Columbus in March, but Blachowicz had to forfeit due to injury, and the fight was canceled.

Blachowicz lost his title to current category champion Glover Teixeira at UFC 267, and the fight against Rakic was his first since that loss in October.

Khabib’s prediction for Alexander Volkanovski vs. Max Holloway at UFC 276

A monstrous knockout at the JCK Night Cage Series