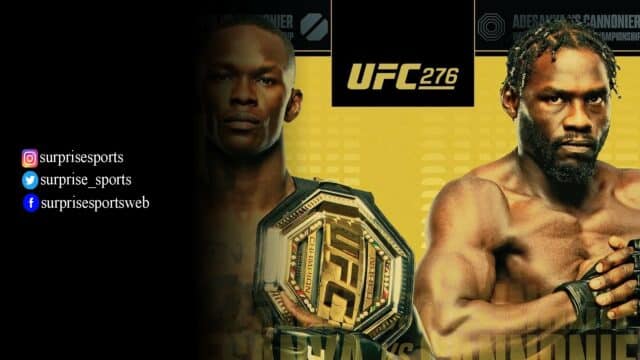 The T-Mobile Arena in Las Vegas will provide the setting as the UFC 276 begins on Sunday, 2 July 2022. Alexander Volkanovski will defend his UFC featherweight title and try to go 3-0 up against Max Holloway.

In another fight, Israel Adesanya’s UFC middleweight title will be on the line as he will hit the ring against Jared Cannonier.

As you are here to know the Purse of the UFC 276, we have got you covered. Let’s have a closer look at the UFC 276 purse and payouts, and learn how much Volkanovski-Holloway and Adesanya-Cannonier will earn.

The official purse and payouts for UFC 276 have not been revealed yet. But we can certainly get an idea how much the fighters will earn by analysing their previous payouts.

How much will Alexander Volkanovski and Max Holloway earn in UFC 276?

Alexander Volkanovski has a 2-0 record over his opponent Max Holloway. The 33-year-old Aussie beat Holloway in 2019 in UFC 245 to win the featherweight title. Again, he defended his title against the 30-year-old American in 2020 in UFC 251.

Since the wins against Holloway, he has defended his title against Brian Ortega and Chan Sung Jung. He beat “The Korean Zombie” via technical KO in his last fight in April.

Volkanovski made his pro debut in 2012. After losing 4 fights, he has gone unbeaten in 21 straight fights. He has been undefeated in the UFC since joining 2016 with 11-0.

On the other hand, Holloway joined UFC in 2012 and started with 3-3. Since then, he went 14-1 to beat Jose Aldo in 2016 to win the UFC featherweight title. He defended the title three times before losing it to Volkanovski. Holloway beat Yair Rodriguez in his last fight in November last year.

Volkanovski is 2-0 up against Holloway in UFC featherweight title matches. Volkanovski earned $280,000 in 2019 when he defeated Hollow for the first time. In the rematch in 2020, the featherweight champion pocketed a whopping $390,000.

These purse figures include bonuses.

How much will Israel Adesanya and Jared Cannonier earn in UFC 276?

Israel Adesanya is on a 11-1 record since joining UFC in 2018. He beat Kelvin Gastelum in 2019 to have his shot at the UFC middleweight title. Later that year, he defeated Robert Whittaker via KO to win the title. Adesanya has defended his title 4 times since then, including a rematch against Whittaker last February.

Adesanya earned $490,000 when he beat Whittaker in UFC 243 in 2019 to win his middleweight title. In the rematch last February, the middleweight champion pocketed a whopping $642,000.

On the other hand, Jared Cannonier made his UFC debut in 2015 and lost against Shawn Jordan. He is on a 8-5 record and 5-1 in his last six. He won his last two fights. Cannonier beat Derek Brunson in his last fight via KO last February.

These purse figures include bonuses.