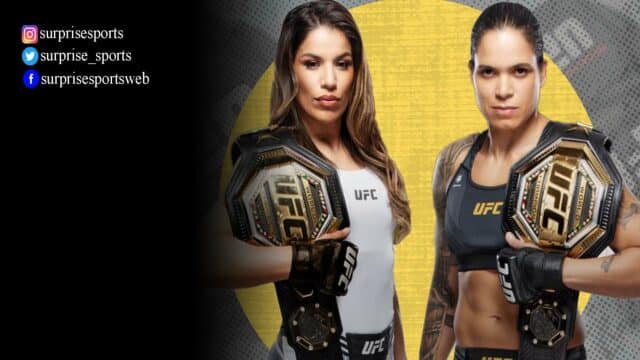 The UFC 277 Julianna Pena vs. Amanda Nunes 2 will takes place on Saturday night (July 30) at the American Airlines Center.

In the main event, the women’s bantamweight champion Julianna Pena will defend her title against Amanda Nunes in a rematch of their fight from December 2021. Pena stunned the MMA world at that time by dethroning Nunes, the reigning double champion. Nunes will be looking to avenge her loss.

The co-main event is a rematch between Brandon Moreno and Kai Kara-France for the interim flyweight title. This bout takes place two and a half years after Moreno won the first fight between these two fighters via majority decision.

The main card will be streaming via pay-per-view on ESPN+.

The first fight between Pena and Nunes took place in December at UFC 269. Nunes came out on top, earning himself $442,000. Pena earned $332,000. This includes any performance incentives and shows money that may be awarded.

How Much Will Julianna Pena Earn?

Julianna Pena was awarded $16,000 for her victory on The Ultimate Fighter in 2013 and took that prize. Pena earned an additional $80,000 for her bout the following time out, which was against Milana Dudieva.

In 2021, Pena competed against Sara McMann before her match with Nunes. It was the largest income she had ever received at that point in her career, coming in at $95,000.

How Much Will Amanda Nunes Earn?

In 2016, after defeating Miesha Tate for the UFC bantamweight belt, Nunes earned a prize money payout of $180,000.

How Much Will Brandon Moreno and Kai Kara-France Earn?