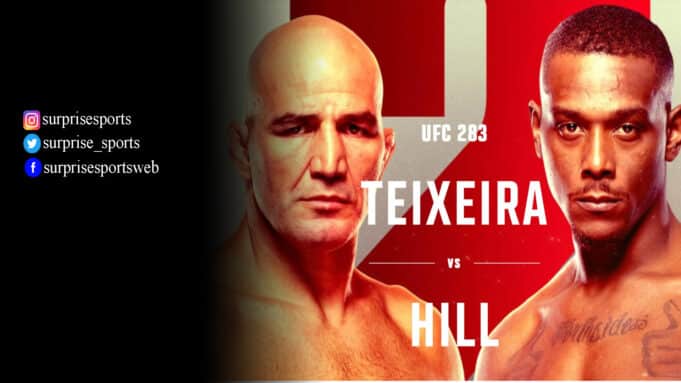 For the UFC 283 main event between Glover Teixeira and Jamahal Hill, Teixeira will reportedly receive a $500,000 guaranteed purse.

On the other hand, the promising talent Jamahal Hill will pocket a $180,000 guaranteed purse.

The hometown hero, Brazil’s Glover Teixeira will get a chance this Saturday to clinch the UFC light heavyweight title. The 43-year-old is on a 33-8-0 record with plenty of experience.

Glover Teixeira won the light heavyweight championship in UFC 267, on October 30, 2021, by defeating Jan Blachowicz. However, the Brazilian lost the belt in UFC 275, in June 2022, to Jiri Prochazka. It is also Teixeira’s most recent fight, ending a 6-match winning streak.

Now, the light heavyweight title is vacated by Jiri Prochazka due to his injury.

The 31-year-old Jamahal Hill is an impressive light heavyweight fighter. The American has only one defeat, an 11-1 record, and one no-contest. It will be the biggest battle in Hill’s career to date.

After looking into the past salaries and UFC insider data, we get an idea about Teixeira’s total payouts for the main event against Jamahal Hill.

For the fight against Corey Anderson in UFC Fight Night, in July 2018, Glover Teixeira earned a $100,000 base salary.

As the Brazilian climbed up the rankings, he made more money. In UFC 267 for the light heavyweight title fight against Jan Blachowicz, he received a $482,000 base salary. He got a whopping $592,000 salary for his title defense against Jiri Prochazka, in UFC 275, in June 2022.

For his title fight against Jamahal Hill in UFC 283, Teixeira will pocket an estimated $725,000 payouts, including sponsorship deals and PPV revenue.

For the UFC 283 main event against Teixeira, Jamahal Hill will earn an estimated $330,000 in payouts, including sponsorship deals and PPV revenue.

It will be the 31-year-old’s biggest payday. Hill received a $136,000 base salary for his fight against Johnny Walker in UFC Fight Night 201.